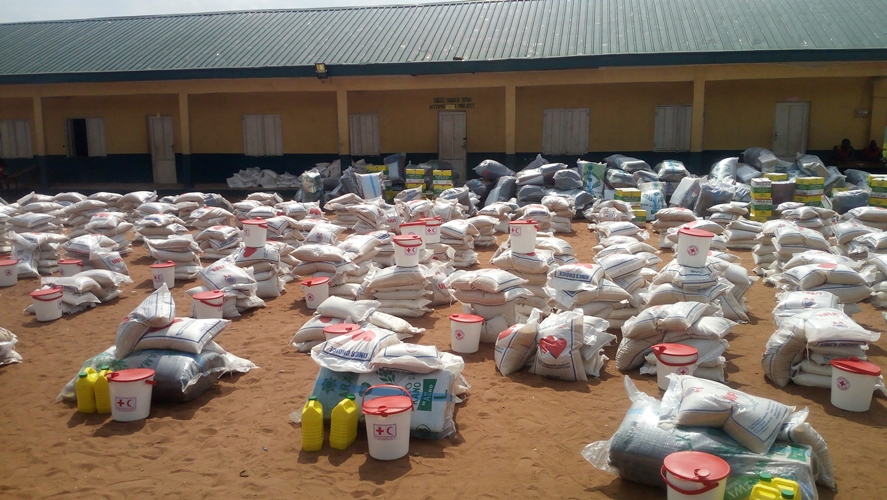 The Nigerian Red Cross Society (NRCS) has extended its humanitarian and Philanthropist service to victims of the recent flood disaster in Delta State who are being sheltered at the various Internally Displaced Persons (IDPs) camps across the State.

The presentation of the relief materials which included food and non-food items to over 1700 families in the State, was inaugurated at the Oneh Camp Asaba which has the largest population of IDPs with 400 families.

Flagging off the donation exercise, the State Commissioner for Bureau of Special Duties, Mr. Ernest Ogwezzy, commended the Red Cross Society for the gesture which he described as unparalleled magnitude and urged private and corporate bodies to emulate the gesture.

His words; “I appreciate the effort of the Red Cross Society as to what they have done. As far as I am concerned, is of unparalleled magnitude. I don’t think any of the society whether international or local will be able to surpass what they had done. It marveled me a lot and I’m pleased by their philanthropist gesture and I commend their effort. I also will like to use this opportunity to appeal to other well meaning Deltans and non Deltans, corporate entities, non governmental organizations; international and local to emulate this gesture of the Red Cross Society. I don’t see any thing that could have been better than this and of course what they have brought will go a long way in complementing that which the State Government has already provided for the IDPs since inception.”

However, he used the opportunity to pray for the sustained effort of the Red Cross in rehabilitating the IDPs, saying, “we will also call on the Red Cross Society to assist us when we are resettling them back to their societies, when the water finally ebbs because it is not a task that only the State Government can conveniently carry alone.”

The Commissioner advised the beneficiaries to make judicious use of all that have been presented to them. “I know that these items that have been given, will go a long way in bringing succor to them and ameliorating their plight in this hard times.”

Also speaking at the flag off, the State Commissioner of Police, CP Mustafa Muhammad commended the Red Cross Society, harping that the gesture has brought smiles on the faces of the 400 benefitting families in the camp.

In his address, the National President of the Nigerian Red Cross Society, Mr. Bolaji Akpan Anani who conveyed the relief materials, said that they are in the State to flag off and oversee the distribution of food items and non food items to those who were displaced by the floods in the various camps in Delta State.

Bolaji said; “The flag off is taking place here but the distribution is done simultaneously in the 8 camps across the state. We are reaching out to about 1700 families; most vulnerable, most affected of all the IDPs that is what we are doing.” Adding, “We are asking for support from private bodies and others for we to continue our support for the IDPs. We are open for donations and direct support is also welcome.”

Speaking to the Journalists, the Delta State chairman, Nigerian Red Cross Society, Mr. Adolphus Anuagasi said that the relief materials for the flood victims were made possible by its partners, the International Federation of Red Cross (IFRC), International Committee of the Red Cross (ICRC) and others.

“We are here to alleviate the sufferings of the people in this camp in conjunction with the Nigerian Red Cross Society and the ICRC, who brought all these materials to help the IDPs in Delta State. We are here to flag off the distribution and we are doing this not only in this camp but in eight different camps in the state, which we have three in Asaba.

“We have bags of rice, clothing materials, blankets, mosquitoes nets, cooking oils, sanitary pads, water cans and other items. My advice to the 400 benefit ting families in this camp is that, they should use whatever that has been given them judiciously and to the glory of God because it is people that had donated these products to them.” Anuagasi stressed.

One of the beneficiaries of the robust relief package, Mrs Faith Asagba who was displaced from Oko-Obiokpo and a mother of Nine, thanked the Nigerian Red Cross Society for the love shown them and prayed God to reward them. “I don’t know what to say. I greet the Red Cross, any place they bring these things to benefit us, I tell Jesus to help them, to give them long life and prosperity.”