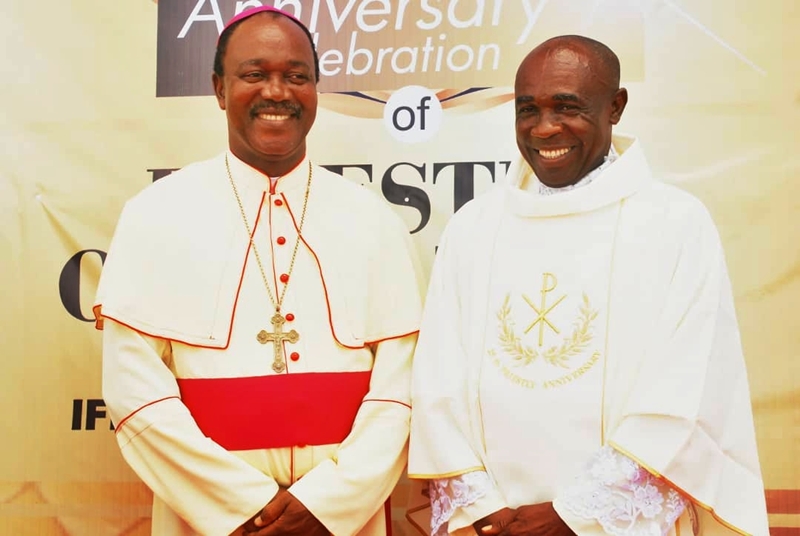 The Very Rev. Fr. Jude Ifeanyichukwu Onyebadi, the Resident Priest of the SS Peter and Paul Catholic Church Issele-Azagba in Aniocha North LGA of Delta State, has today launched a Foundation called Petscholar Onyebadi Foundation to celebrate the 25th anniversary of his Priestly Ordination; which equally seeks to honour the memory of his parents.

The humble Priest who was today eulogized by his colleagues and friends during his Thanksgiving Mass in the church, announced his intention to relinquish his multi million naira Farm to the Catholic Church, but with a caveat that he should be allowed to manage it as a Foundation which should get 40% of the proceeds of the Farm.

Father Jude recounted his priestly experiences in the past 25 years, beginning from his major assignment in the JDPC where his passion for humanitarian services was fuelled. He said on exit from JDPC he had fallen in love with humanitarian projects, which he has been able to sustain through the Farm – Ifeanyi Farms Ltd Issele-Uku.

He revealed that the Farm which as at today has over 250 acres of land and over 150 active farm workers had trained several people through the Seminary and the University levels as part of its contributions to uplifting the cause of humanity.

The amiable Priest none the less, announced a donation of a brand new bus to the SS Peter and Paul Nursery and Primary School, Issele-Azagba and to train its best graduating pupils through secondary schools and beyond.

Coordinating the launching of the Foundation as Chairman of the occasion was the former Secretary to the Government of Delta State, Comrade Ovouzuorie Macaulay.

The former Labour Leader who launched a million naira to the Foundation, commended Rev. Fr. Onyebadi for his tenacity and passion in using the Farm to advance the cause of humanity through educational scholarships, employment and entrepreneurial supports.

Earlier during the 25th Ordination Thanksgiving, the Bishop of Issele-Uku Diocese, Most Rev. Dr. Michael Odogwu Elue had blessed Rev. Fr. Jude Onyebadi, encouraging him to remain steadfast as he uses his calling to liberate humanity from poverty and hopelessness.

The homily was preached by Rev. Fr. Mark Nwoko, who recounted his tutelage under Very Rev. Fr. Jude. He described the celebrant as a selfless humanitarian who has continued to not only mentor those of them but always adding value to their lives.