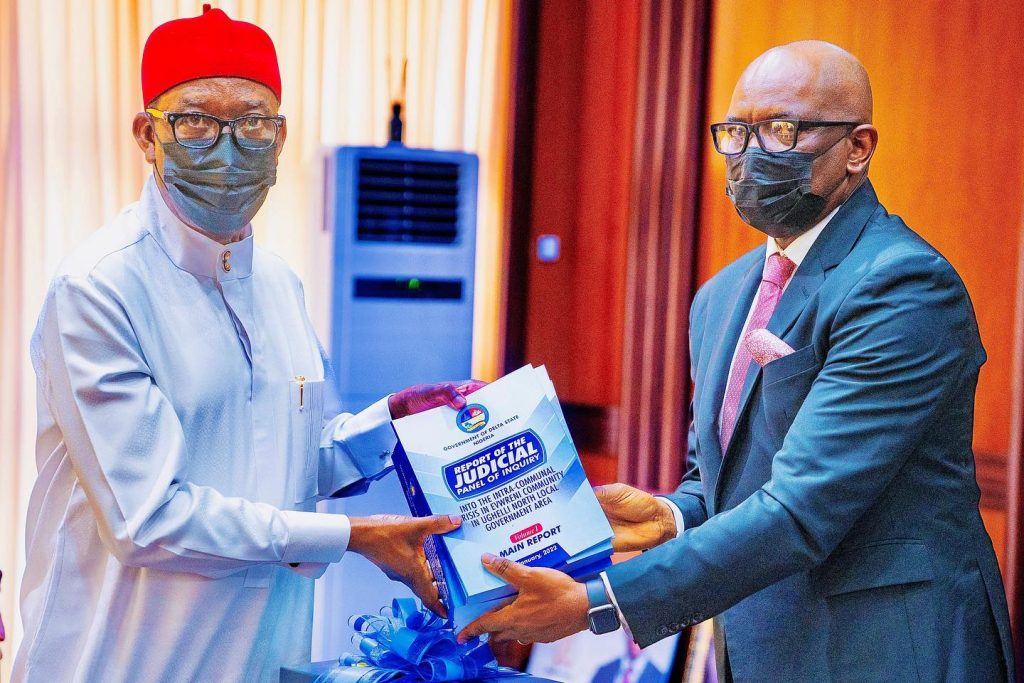 Draft Government White Paper on the report of the Judicial Panel of Inquiry into the intra-communal crisis in Evwreni, Ughelli North local government area of Delta State, has directed urgent actions to mop up arms in possession of the Evwreni Vigilante Group.

The white paper also directed the Commissioner of Police, Delta State Command and the State Director, Department of State Services, DSS, to in collaboration with the Chairman, Ughelli North Local Government Council perfect the arms mop up exercise.

It directed the Chairman, Ughelli North Council to work in concert with relevant security agencies to reconstitute the Evwreni Community Vigilante in line with the Delta State Community Security Corps Agency Law 2020.

The white paper acknowledged the panel observation that the last election into the office of the President General of Evwreni Improvement Union without election into other executive positions of the Union has remained a predisposing factor to the crisis in the community.

Accordingly, it accepted the recommendation that “the President General of Evwreni Improvement Union, who is the Sole Executive member of the Union should step down from the position”, and requested the Delta State Ministry of Women Affairs, Community and Social Development to take over the conduct of fresh elections into all elective positions in the Union, based on the Delta State Regulation of Community Development Association Law 2021.

It further directs both Mr Bright Adjogbe and Chief Collins Udi who were contenders in stalemated elections to “in the interest of peace recuse themselves in perpetuity from participating in the election into the executive of Evwreni Clan Improvement Union”.

It accepted recommendation for the traditional ruler of Evwreni kingdom to present himself before the relevant court of law to answer to charges instituted against him, but was appalled by the judicial panel of inquiry findings to the effect that the king no longer commands the support and respect of different groups in the kingdom which is clearly against the expectation of a father figure status within the socio-cultural fabric of the community.

“A suspension is not considered expedient in the circumstances as such will be prejudicial to the norms of justice. In addition to facing up to whatever charges might have been preferred against him, government directs that the Chairman of Ughelli North local government council, together with the Peace and Security Committee of the local government should liaise with HRM Oghenrkevwe Owin Kumane Erhuwudede 111 with a view to working out and jointly implementing a plan for peaceful co-existence and to reconnect with his subjects as their traditional ruler”.

The draft paper accepted recommendation for payment of compensation to those whose properties were destroyed during the crisis and direct the State Emergency Management Agency, SEMA to take action in that regard.

Government noted recommendation on agitation for an autonomous community by the Unenurhie and Okpahwa quarters of Evwreni, where the Panel observed that the issue falls outside the ambit of its terms of reference as such agitation is guaranteed under the laws and implores the agitators to forward their request to the appropriate government department responsible for such an issue.

The white paper also amongst others, directed the Attorney-General and Commissioner for Justice, Delta State to take appropriate follow up actions by writing the Federal Capital Territory Police Command to release the investigation report on the cause of death of Tuesday Okuah and release the corpse to the family.

It could be recalled that Evwreni community has been engulfed in intra communal crisis since 2019. Worried by the sad development, Governor Ifeanyi Okowa on 20th October 2021 appointed a Judicial Panel of Inquiry with a view to finding a lasting solution to it.

The terms of reference include, to establish the remote and immediate causes of the crisis, to ascertain the role played by various individuals, groups, and their sponsors in the crisis and apportion blames where necessary and to look into and resolve any other issues as a means of bringing lasting peace to the community.