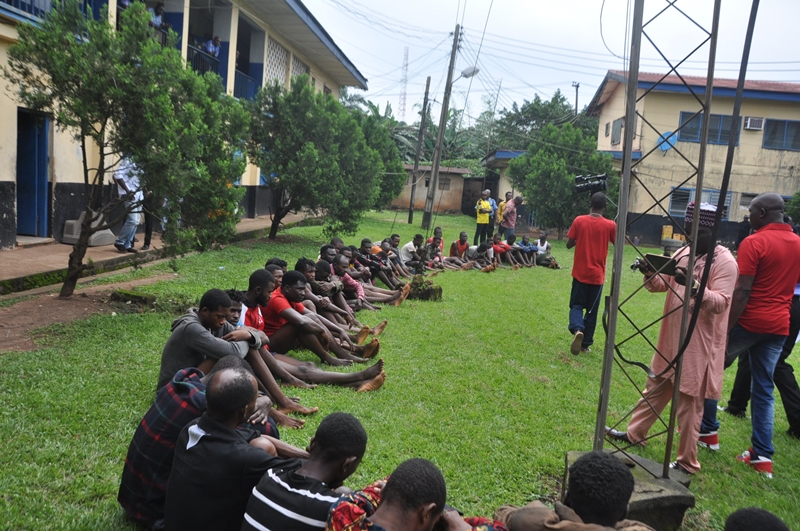 The Edo State Police Command on Tuesday, October 16, 2018 paraded 72 armed robbery, cultism and kidnapping suspects, who have been terrorising Benin metropolis over the past few weeks.

Speaking to journalists in Benin on the arrest of the suspects, the state Commissioner of Police, Mr Johnson Kokumo, said 58 cult members linked to the killings of eight persons in different locations in the state were among those paraded.

“There was heightened criminal activity viz cultism by rival cult groups: the Black Axe, Eiye, Black Mafians, Vikings within the period 11th and 14th October, 2018, which led to death of eight persons.

“The police quickly moved in and restored normalcy. 39 arms, 54 cartridges, three battle axes and five fake drinks were recovered from the 72 suspects.

Kokomu gave break down of the suspects to include one Sampson Omorodion, 34, who was arrested for allegedly killing his younger brother, named Imuetiyan Omorodion aged 27, by stabbing him twice on the neck with a knife after an argument between them.

“On October 10, this year, the Command arrested two kidnappers at Five Junction for allegedly kidnapping a 36-year-old lady at Ugbowo area of Benin city,” he added.

The Police boss reiterated the need for citizens to be vigilant at all times and to report any suspicious activity to the police for prompt attention, assuring that the state was unsafe for criminals.

One of the suspected cultists, who is a member of Eiye Confratenity, identified as Azuka Ike, said he joined the cult few years ago and has remained a member but was arrested in Delta State when he fled Edo State, following the renewed fracas with rival cult group.

Precious Okpako, a cab driver, who was rescued by the quick response of the Police, commended the Force for saving him from the armed robbers, who posed as customers.

“I was hired and my car taken from me at gun point and was locked in the booth of my car but I managed to escape and raise an alarm and the police responded to save me,” he said.