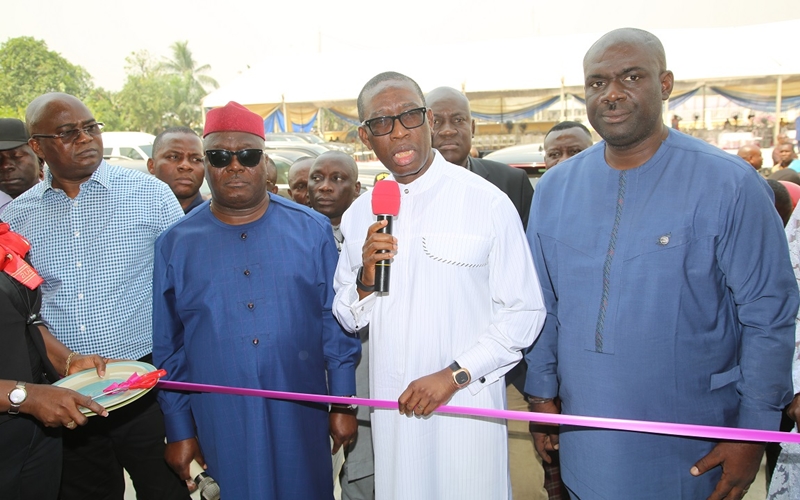 In keeping with its vision of re-strategizing for effective delivery, the management of the Delta State Oil Producing Area Development Commission, DESOPADEC, headed by its Managing Director and Chief Executive Officer, Chief Askia Ogieh, has put words to action by kick starting the New Year with a harvest of projects in less than a year in office.

The DESOPADEC boss upon assumption of office in July 31, 2019 had vowed to implement new ideas to meet the mission of putting smiles on the faces of people in the host communities through the provision of infrastructure, health care, roads, bursary scholarships and a host of others.

In his remarks after the inauguration of the board, Chief Askia had promised to ensure that the people will own the projects the commission embarks on saying: “By this I mean that from the time of conception, they would be involved.

“We will adopt the town-hall meeting formula to get their involvement, to know which projects they want, so that we can see how we can meet them at their point of need and ensure that we deliver all of these in a very transparent process.”

True to his words, two months after he spoke on his plans to synergize with stakeholders in the oil bearing communities, DESOPADEC began its town hall meetings and pledged the commitment of the commission to a bottom-to-top approach which he said was a tactic the agency will employ on project execution for the people contrary to the scenario where such projects are imposed on them.

In preparation for the rebranding of the commission, Chief Askia tasked staff of the commission to have a paradigm shift from the old DESOPADEC to the new positive approach being implemented by the current board noting that they (staff) are the ones to drive the needed change; hence they need to embrace the challenge that comes with the change.

With all variables finally in place, the agency went to work in the better half of 2019 and came out with a bang in the New Year with the commissioning of a harvest of projects in what the state governor, Dr. Ifeanyi Okowa described as “the commission’s favourable response to the needs of our various communities.”

Speaking during the commissioning of five legacy projects in Isoko North and South local government areas of the state, the governor reaffirmed his commitment to rendering selfless service to Deltans.

The projects, which were inaugurated amid jubilation by the people, were Opute Hall, Ozoro; Ultra Modern Civic Centre, Uzere; Model Secondary School, Uzere; Students Hostel at the Delta State University, Oleh Campus and Six three-bedroom bungalows for visiting Lecturers also at the university.

In his remarks at the event, Governor Okowa said: “This administration has always been on course; we have come to Isoko to inaugurate some infrastructure development projects executed by DESOPADEC, an arm of government.

“We are committed to providing adequate service to our people and we will remain focused; as you can see, the amendment of the laws establishing DESOPADEC has given room for more resources to go into provision of infrastructure. Several communities in the oil-producing communities are feeling the impact of governance.”

On his part, the State Deputy Governor, Kingsley Otuaro while commissioning a four semi-detached two-bedroom bungalow housing unit built by the agency for the Nigeria Maritime University, NMU, Okerenkoko in Warri South West local government area of the state the previous day, described the initiative of the agency as cheering and encouraging.

According to the Deputy Governor, the project would certainly go a long way in addressing the nagging accommodation challenges presently confronting the young and strategic institution of higher learning located within the coastal axis of the state.

Speaking at both events, an elated Chief Askia, said the project which was completed in record time of nine months after it was awarded in May 2019, is in line with the Stronger Delta initiative by Governor Ifeanyi Okowa.

Expressing joy and satisfaction of the project which he said is in sync with the new management policy of finishing projects within the budgetary year of the commission, Askia said more significant improvement would be noticed in the course of time as the commission has rolled up its sleeves in quality project execution, adding that it will continue to execute people-based projects that reflect the needs and desire of the mandate area.

With just one month into the New Year, Deltans from the oil bearing communities are sure in for a treat from the interventionist agency which has achieved a lot in six months in office.