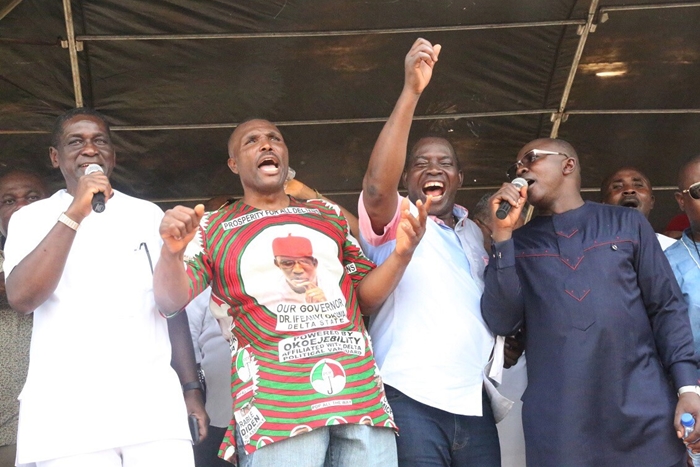 Determined to tour the nooks and crannies of Delta state to canvass support for the re-election of Governor Ifeanyi Okowa, Delta Political Vanguard (DPV), a political group affiliated with the Peoples Democratic Party (PDP) in the State, has called on all Deltans and eligible voters to get their Permanent Voters’ Cards (PVC) ready to return Governor Ifeanyi Okowa for a second term come 2019.

The group chaired by Hon. Michael Diden (Ejele) gave this charge on Saturday, 10th February 2018, at Agbor during a rally organised to gather support for the re-election of Governor Okowa who they said has performed to the satisfaction of all Deltans.

In his address, Hon. Diden who is also the Member Representing Warri North Constituency at Delta State House of Assembly (DTHA) said; “Governor Okowa must complete his second term, he has done so much, if those of us in Delta South and Central are saying that we want Senator Okowa for second term, it means the entire Delta State want Senator Okowa again, we should get our voters card to enable us show our strength through votes.”

The event which was largely attended by PDP Chieftains across the state with their supporters, witnessed series of speeches and songs extolling the virtues and sterling qualities of the Governor.

Speaking on behalf of Delta Central, Engr. Omeni Sobotie said, “every Urhobo is committed to Governor Okowa coming back as Governor, we know that with his return, and successful completion of his tenure in 2023, it will be the turn of the Urhobos.”

The Itsekiris who spoke through Mrs Gbubemi Kpenosen stated that “we all love Governor Okowa, he is working to our satisfaction, we want her back, so, every woman, every youth should collect PVC to vote Okowa again, if you want Okowa again, ensure that you register to enable you vote in the election.”

Hon. Tam Brisibe who spoke on behalf of the Ijaws, stated, “Ijaws are fully backing Governor Okowa and there is no going back on that,” while Bashorun Askia Ogieh said, “Senator Okowa is a good product and does not need much to market him, we are confident that he will win again in 2019.”

The Director-General of DPV, Hon. Ifeanyi Eboigbe thanked Deltans for their support saying the Governor will hear the clarion call on him to re-contest for the governorship seat.