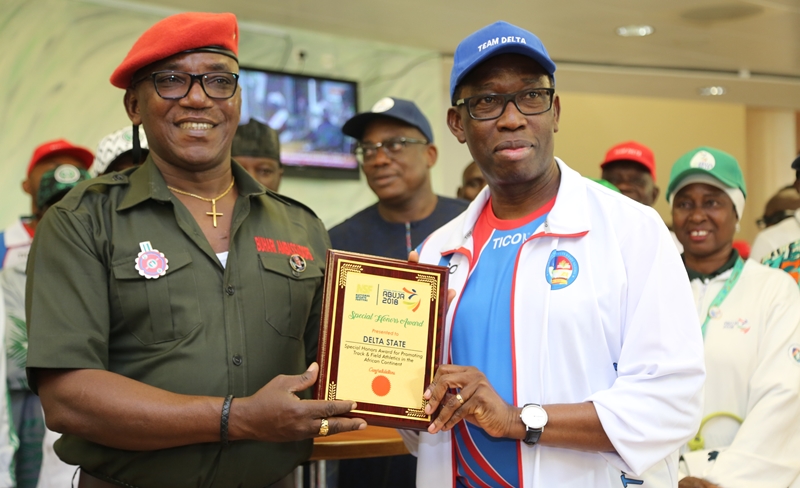 Nigerian Minister of Sports, Mr Solomon Dalung who presented the award Sunday, December 16, 2018 shortly before the finals of the 19th National Sports Festival, tagged Abuja 2018 to Governor Ifeanyi Okowa of Delta State, observed that Delta State has blazed the trail in the promotion of continental championships.

Mr Dalung who listed the achievements of Delta State in the area of sports development since the emergence of Governor Ifeanyi Okowa to include the hosting of the Senior Africa Athletics Championship, emphasised that Delta State has continued to dominate in sporting championships and has also, contributed immensely to the provision of man power for the Nigerian sports industry.

At the award ceremony which took place at the Abuja National Stadium, Lagos and Rivers States also received awards for promoting Sports Tourism and Promoting Wrestling in Nigeria respectively.

While congratulating the Ministry of Sports for organising the festival, Governor Okowa amidst applause, stated, “there is no doubt that sports development is very important in our nation,; with all the energy in our youths, they need to be guided in the right direction; for us as a state government, we believe that the youths must be engaged continually in sports activities.”

“Sports is a unifying factor for us particularly in Delta State that is multi-ethnic; it also helps the youths to be disciplined,” he stated.

Governor Okowa who was apparently elated with the performance of the Delta State contingent to the sports festival continued, “we must also, begin to encourage our children to engage in sporting activities because of the economic factor involved; if we are able to get the young ones not just to win laurels for our nation Nigeria but, help themselves and others who are close to them; it is important to put a lot of money into sports development because of the benefits.”

He disclosed that he was inspired to invest in sports development by the achievements recorded by General Samuel Ogbemudia when he was the Governor of the defunct Bendel State.