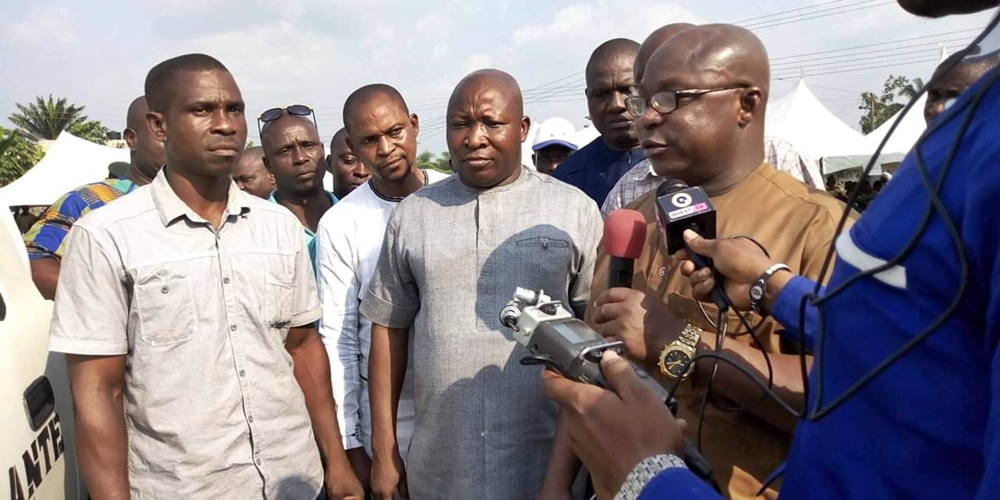 Arc. Joseph Ogeh making the Presentations of Hilux Van To Vigilante and Gift Items To Women in Isoko North

Ahead of 2019 general elections, Commissioner for Housing in Delta State, Arc. Joseph Ogeh has urged Nigerians to be security conscious and avoid actions capable of causing disaffection in the polity.

Arc. Ogeh made the call Sunday, December 16, 2018 while presenting Hilux Van to the Vigilante in Iyede community, Isoko North local government area of Delta State. The event which took place at Atebo Primary School, Oghara-Iyede, the Commissioner also presented gift items to more than 4,000 women, stating that such was in line with the celebration of Christmas as a season of giving selflessly. The Hilux Van and gift items were donated by the Arc. Joseph Ogeh Foundation.

“Christmas is a period to show love, with love, we can live in peace with one another; this is also campaign period for the 2019 general elections, we should avoid any action that can cause crisis.” He disclosed that the Hilux Van will assist the vigilante in patrolling the area, adding that they should work in harmony with the Police and other security agencies to ensure that there is no break down of law and order.

“Beyond these gift items, we have done several empowerment programmes in the past but we are planning a major one for the youths and the men soon. We will encourage our youths to learn skills and establish them to become entrepreneurs in line with the SMART AGENDA of Governor Ifeanyi Okowa,” he said

Majority Leader Delta State House of Assembly, Hon Tim Owhefere thanked Ogeh Foundation for the gesture assuring that with the large turn out of women for the ceremony, PDP will coast home to victory in 2019.

Chairman of Peoples Democratic Party (PDP) Isoko North local government area, Prince Godwin Ogorugba at the ceremony, urged the women to vote massively for all the PDP candidates in the 2019 general elections as such will attract more development and empowerment to Iyede and Isoko people.

Mrs Elizabeth Okpako, Women Leader, Uruosuo Community, Iyede kingdom who spoke on behalf of the beneficiaries, thanked the state Governor, Dr. Ifeanyi Okowa for finding their son worthy to be appointed as the Commissioner for Housing, assuring Arch. Ogeh that all the women in Iyede kingdom are for PDP and will vote for PDP in 2019 general election.