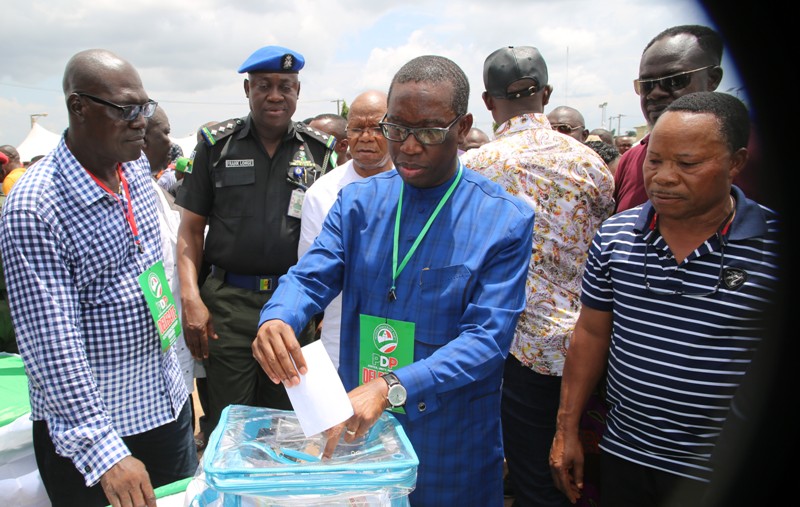 Ahead of the Gubernatorial primaries, a cross section of PDP delegates have called on Governor Ifeanyi Okowa to put the interest of the state over and above any personal grievances in producing his successor.

In an opinion poll conducted on thousands of delegates across the state at the conclusion of consultation visits by the aspirants, majority of them said after assessing the personality and programmes of the aspirants, they have seen that Olorogun David Edevbie is unarguably the most qualified and best prepared to deliver on the job.

Pointing out that their conviction tallied with Governor Okowa’s commendations of Edevbie on several occasions, they wondered why he would now be shying away from the glaring fact

They revealed that at a meeting with selected Councillors Governor Okowa told them that out of the three persons shortlisted by the DC-23, two contested against him in the 2014 primaries and that is why he is against them.

Majority of them who pleaded anonymity pleaded with Governor Okowa to remember his words and have a rethink, pointing out that the state will suffer consequences if the party denies the best hand simply because of Governor Okowa’s malice against Edevbie.

They also expressed worries about ongoing stifling of free political opinions, intimidation and victimisation of delegates perceived to be in disagreement with a different choice.

Saying that in view of the harrassment they are weary of speaking publicly, they indicated that they will however vote according to their conscience at the primaries.

Reviewing the Governor’s position, they pointed out that contesting in the primaries within the same political party is a family affair and should not lead to such malice as to undermine both the interest of the party and the state as a whole.

“We have long gone past the 2014 primaries. After all said and done, the party made sure that the right thing was done and Okowa emerged Governor. Should that not satisfy him?

“We have also seen the video of a rally attended by some of our members in which Okowa told the people that immediately after the 2014 primaries we became a reconciled and united family. He also said on that occasion that right from the day of the primaries, Olorogun David Edevbie had continued to support him in several ways, leading to his victory at the general elections. He even called him up to the podium and asked the people to thank Edevbie on his behalf. So, why is he still holding malice and taking us back to same issue which he himself said had long been settled? Even the UPU (Urhobo Progress Union) has appealed to him to let go. What else? Should we now say that people who contest against each other in our party primaries should remain mortal enemies? Is that healthy?

“Apart from the fact that all Deltans can see that Edevbie is most qualified, experienced and exposed, we have also been taking note of what Okowa has said about him through the years. There must be a reason why he appointed him his Commissioner of Finance and Chief of Staff also. You cannot give those positions somebody you do not trust. In 2020 or so, he said Edevbie has continued to offer genuine leadership not only to Delta State but to Nigeria, that he comes with a lot of knowledge, that his professional services to the state has been invaluable, that he does things like they are done in developed countries. These are the things that Okowa has told us about Edevbie that has also endeared us to him, so why should he now be turning away from such qualities simply because of his malice against him on the long foregone 2014 primaries? That is not the right way to choose a Governor for our state. It is also not the right value or spirit for a leader to inculcate in his people. What is most important is the capacity to generate resources and manage development. That is what Delta State needs and that is not in question on Edevbie.

“However, Okowa remains our Governor and we can only appeal to him to rethink his stands in the overall interest of the development and future of the state.”

On Edevbie’s closest rival, Sheriff Oborevwori, the delegates said they have nothing personal against him but that he is equipped enough to govern the state.

“Sheriff is a member of the family. We have also taken note of the issues surrounding his name and certificates. We can see that something is wrong somewhere such that could cause collateral damage to our party if care is not taken. For many of us and our leaders, we know he is not molded and equipped as a Governor. It takes more than being a local champion but he has his role. As Speaker, he cooperated with Okowa to have his way on everything such that there was no rancour between the executive and the legislature but when it comes to the nuances of governing the state, that is a different ball which requires higher personal organisation and coordination, higher professional skills, greater competence in development issues, global exposure and wide contacts. We all know he cannot compare with Edevbie on these. Even Governor Okowa knows that.

“We know that they are capitalising on the fact that some of us delegates do not fully understand these issues and so they would just transport us, camp us and lead us like sheep to vote according to their instruction. We know that it is because they have manipulated the process and got a list of ad-hoc delegates that serves their interest while they lie that they are organising free and fair primaries, but we all know that we are not lying to anybody but to ourselves. That is why we are quietly appealing to some of our leaders to see the larger picture and the implications for the future of our state if they use all those lies to leave the best just to satisfy a sense of malice.”