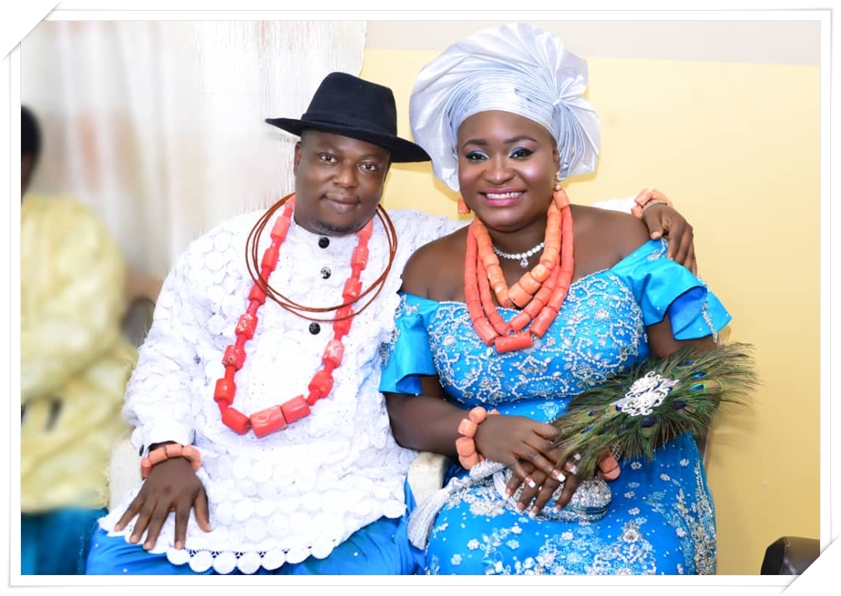 It was all glitz and glamour on Saturday, October 20, 2018 as Warri metropolis stood still to witness the traditional marriage rites between Mene Eghagha of Mereje in Okpe LGA and her heartthrob, Ejiro Nomuoja, from Ekakpamre Village in Ughelli South LGA, Delta State.

Mene, a graduate of Mass Communication, is the last daughter and child of late Brigadier General Harris Eghagha, former Military Administrator of Ogun state and Military Attaché to Ghana, while Ejiro, A Masters Graduate of Business Law, University of Portsmouth, United Kingdom and a staff of Beautification office Delta State, is the son of the late Chief S.E Nomuoja, a renowned Chattered Secretary and Chief Mrs Lyn Ivie Ohwojeheri, a devoted PDP faithful and Chieftain.

The ceremony which was well attended by friends and relations both home and abroad, had the State Governor, Senator Dr. Ifeanyi Okowa in attendance who was ably represented by the Secretary to the State Government (SSG), Rt. Hon. Festus Ovie Agas.

Governor Okowa through the SSG, presented a congratulatory wedding card to the couple who were thrilled by the noble gesture of the Delta State Government.

Royal Fathers who adorned the celebration of love were his Royal Majesty, Ovie R.L Ogbon Oghoni-Oghoro 1, (JP) Royal Canon, the Ohworode of Olomu Kingdom ably represented by one of his Chiefs who conveyed the gift of His Royal Highness to the couple. The Orodje of Okpe Kingdom, Major General Mujakperuo (Rtd) was also represented by Okpe Palace Chiefs (Okakuro); the Ovie of Effurun-Otor and Okobaro of Ugiewven Kingdoms sent Representatives; the Osuivie of Agbarho was also represented by palace Chiefs from Agbarho.

The Urobho Elders and Leaders Forum and UPU women wing were also in attendance at the colourful event.