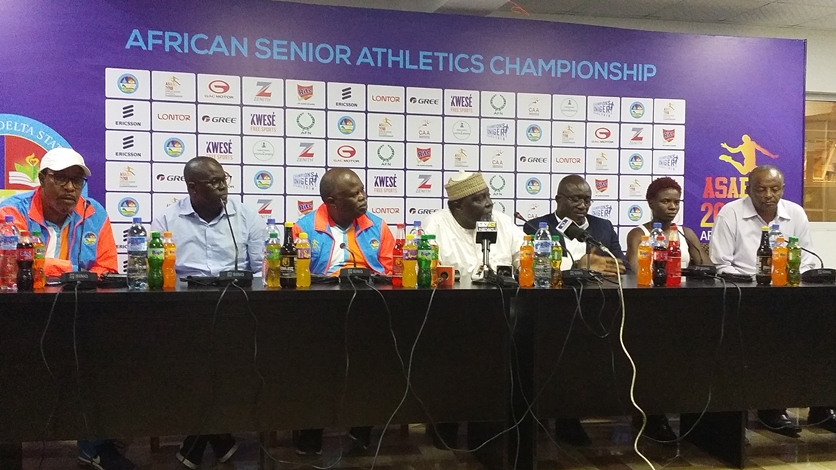 The Chairman of the Local Organising Committee for the 21st African Senior Athletics Championship, Solomon Ogba has given assurances that Asaba 2018 will not only live up to expectations but will surpass previous  events hosted on the continent.

Ogba gave the pledge at the CAA press conference held on Monday at the Media center at the Stephen Keshi Stadium.

The LOC boss said though they are a few places still being perfected, all will be ready ahead of the August 1 opening ceremony at the Gov. Okowa Main Bowl at the newly completed Stephen Keshi Stadium.

He said: This is a record-breaking championship because we have exceeded all the benchmarks given. “We have like 52 countries, 48 of which were around for the DRM

In a press statement issued by the Head of media and publicity, Olukayode Thomas, Ogba revealed some of the innovations in place to make CAA Asaba 2018 a success.

“We are also going to mix sports and entertainment for the next five days. For the first time, we are introducing prize monies. We are very happy with the cooperation we have received from the journalists; the IAAF and the CAA will be running training for the media practitioners and we are happy about that.”

On his part, CAA President, Hamad Kalkaba Malboum admitted that he is surprised with Asaba has put in place to host the continent; adding that best of African athletics will be on parade from August 1-5.

“I visited the stadium (Stephen Keshi) several months ago but I never thought it could host a championship of this magnitude. We express our profound gratitude to the Delta state governor Dr. Ifeanyi Okowa.

“I also met the Sports minister, Solomon Dalung who told me the Federal Government will also support this event, so we are grateful to the President of the country.

The CAA President said it was delightful to have the best legs on the continent in Asaba and he assured that Africa will get the best of representation at the Intercontinental Cup in Ostrava in September.

“The best athletes of Africa are already here, and we are going to select a strong team for the Intercontinental Cup that would be competing against the rest of the world.

South Africa are the defending champions of the African Senior Athletics having hosted and won the last edition on home soil in Durban.