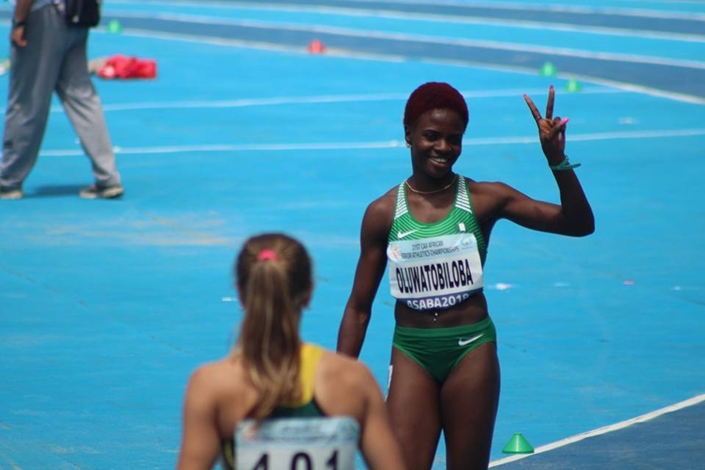 The host country for the 21st African Senior Athletics Championship, Nigeria started raking in medals with Tobiloba Amusan and Enekwechi Chukwebuka winning two gold medals for the country on the Day 2 of action in Asaba.

Amusan who is the reigning Commonwealth Games champion had given her words on the eve of the commencement of CAA Asaba 2018 that Team Nigeria will be putting her best foot forward and she did not disappoint; winning the 100m hurdles with a time of 12.86secs.

There was more to cheer for Nigeria in the Men’s Shot Put event where Enekwechi Chukwuebuka won gold in what is his first African Championships appearance.

Enekwechi threw a distance of 21.08m to pick gold ahead of the duo of Mohamed Khalifa from Egypt and Kyle Blignaut of South Africa.

While many were taken aback with the pulling out of Blessing Okagbare from the 100m event, Nigeria nonetheless made it to the podium with Joy Udo-Gabriel proving she is on top of her game; winning another bronze medal.

Temilola Ogunrinde also added to Nigeria’s medal tally on Day 2 as she won silver in the Hammer Throw with a new National Record of 67.39m.

With the high-quality performance being churned out by Africa’s best legs in Asaba, it was not surprising that the IAAF President, Sebastian Coe expressed delight at being in Delta State for the African Championships.

In a press conference held on Thursday, the IAAF boss said he will be working towards getting more support for African countries even when they are organizing their regional meets.

The IAAF President said: “I am not just here just for the ceremony, I brought a big team with me from our headquarters to understand the challenges countries face in delivering athletics events like this even at the regional level.

“My team are also here to look to address and observe to see how they can be more helpful in the delivering more opportunities.” He added.

On his part, the LOC Chairman for CAA Asaba 2018, Solomon Ogba apologized for all the shortcomings and also addressed the overblown reports about athletics sleeping at the Lagos Airport before making it to Asaba.

Ogba explained that most of the affected athletes arrived at the Lagos airport by the time Asaba airport has closed.

He stated that the athletes were checked into good hotels that same day for two days before planes were made available to fly them to Asaba.

He said, “They told us that some athletes were at the airport and cannot go to Asaba. The foreign athletes put the organizers under pressure but that is not what we are saying right now because we have passed this stage”.

“The Nigeria media did not help matters and did not ask questions from the right source. If the team had given us their arrival schedules, we would have known were they would be arriving. This is Africa, people who cannot provide for you when they come, they’ll want to attack because they see Nigeria as a big brother”, he added.

The LOC boss, however, apologized to the journalists covering the championships for the hiccups observed at the start of the event.

He also debunked the rumors that Tanzania pulled out of Asaba 2018 as he revealed that they never expressed intention to be part of the African championships in the first place; having been absent at the Delegation Registration Meeting.