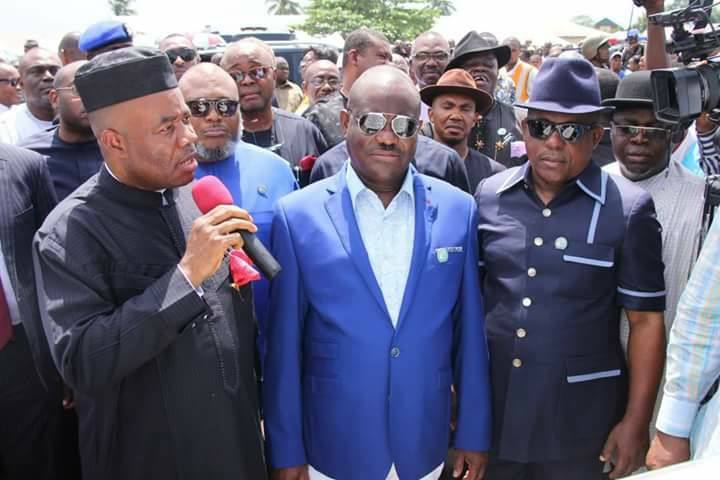 He described Governor Nyesom Ezenwo Wike of Rivers State as the best performing governor in the country.

Commissioning the completed Kpopie-Bodo Road in Gokana Local Government Area on Monday, Senator Akpabio expressed gratitude to God for allowing him to witness another governor in the Niger Delta who believes in profound development.

The former Governor of Akwa Ibom state commended Governor Wike for diligently constructing the Kpopie-Bodo Road, which has given the people of the area a sense of belonging.

Akpabio said: “From the Pictures I have seen here, I wonder how you people lived before Nyesom Wike became governor. Oh my people, you must have suffered. This road will help revive the economy of the area”.

He said that by creating access to communities of Gokana, Governor Wike has empowered them and given them the leverage to grow.

In his remarks, Rivers State Governor, Nyesom Ezenwo Wike said that his administration has fulfilled the promise it made to Gokana people, without giving excuses.

He regretted that the former Works Commissioner under the Amaechi administration, Mr Victor Giadom, who hails from Gokana Local Government Area allowed a project under his supervision to be abandoned.

He noted that Senate Minority Leader was invited to commission the project because he was one of the pillars of support during the electioneering period.

Wike stated that he will continue to deliver democracy dividends to the people of the state.

Commissioner of Works, Iheanyichuwu Bathuel said that Kpopie-Bodo Road which is about 10kilometres has been fitted with street lights.

Secretary to Rivers State Government, Sir Kenneth Kobani lauded Governor Wike for his commitment to the development of Ogoni land.

He assured the governor of the support of Ogoni people in his future political endeavours.

Highpoint of the occasion was conferment of a chieftaincy title on Governor Wike by the Gokana Traditional Rulers Council.