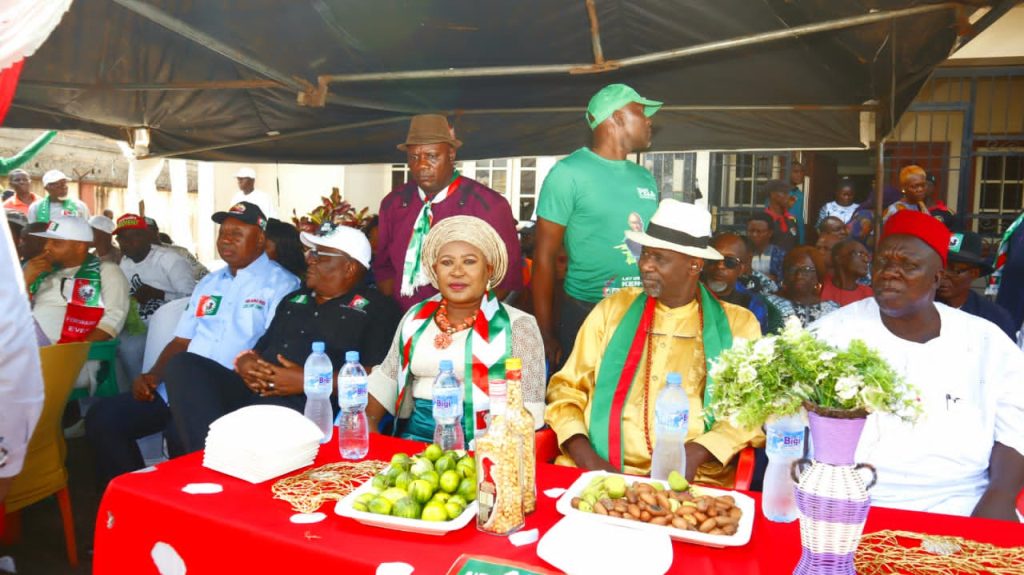 The Delta State Labour Party Gubernatorial Candidate for the 2023 general elections, Deacon Kennedy Kawhariebie Pela has lamented the abandonment and long suffering of Ndokwa people under the reign of Peoples Democratic Party, PDP, in Delta State, vowing to turn their fortunes around when he assumes office as Governor.

Pela made this declaration in a brief chat after a reception hosted by LP Chieftain in Ndokwa nation and member of the LP Presidential Campaign Council, Chief Kenneth Olise in Ndemili Community of the state.

He said; “Today is a special day that God made for us to be hosted by our indefatigable leader and a noble son of Ndokwa nation, a great leader of our party Chief Kenneth Olise. First I wish to let you know that the Ndokwa nation is very strategic in the economic prosperity and development of Nigeria as a whole and the second largest in terms of landmass and population in Delta State. But despite the fortunes that the Federal and State government have been making from the oil and gas operations, the Ndokwa nation have continued to live with water pollution, gas flaring with toxic emissions and land degradation with no consideration for critical social and physical infrastructure, and that this has to stop.

“Since 1960, the main Federal Government footprint that existed was the Nigerian Prisons that was recently changed in name to a Federal Correctional Centre. It has been a calamity of untold proportions and sometimes you wonder, who are the people representing the Ndokwa nation for all these years, and where have they been? We have to pray to God to intervene in the face of this inhumanity, injustice and inequity that has been waged against the Ndokwa people.”

“Today, I stand here to tell you that you do not deserve such neglect. Those of us that have ears to listen already hear your cries. We hear the cries of many fathers and mothers, brothers and sisters that are passing through suffering and undue hardship, and are in several camps today because of the flooding that overtook their homes, their land and their properties.”

“My Deputy and I, in the company of other members of our great party have gone around various IDP and non-IDP camps in the entire state from Ewu, Uwheru, Oleh, Ozoro, Ashaka, Kwale, Umusadege, etc and contributed our own effort in support of displaced persons. This is what a caring and responsible government, whether at local, state or federal government level should done well in advance. We understand that some officials of government, having failed in this primary responsibility, went around “shedding crocodile tears”, pretending to the sympathetic to the difficult conditions and needs of the people.”

The governorship candidate also lamented the neglect of Ndokwa nation by the federal government in the NDDC board appointment since it was created, describing it as an abomination that cannot be left to continue. “Under the Labour Party administration that I will head by the Grace of God, I will never allow that to continue. We will tackle it with every fibre of our strength and commitment.”

Continuing he said; “Today, Labour Party stands for moving Nigeria forward from “Consumption to Production”, and that includes Delta state. As a party that is very passionate about anything that relates to labour, the creation of jobs is very high on our agenda and our target is to transform Delta State into a “massive factory” where job opportunities will be created in all the three senatorial districts. This is the reason why power supply and its availability will be on our agenda throughout the life of our administration. It will receive utmost attention from me on Day 1 in office so that we can pursue proper development and bring prosperity to all of you in every section of our state.”

“From all I can see, the Ndokwa nation is a typical example of political loyalty that went rotten and therefore bore no fruits. On our part as Labour Party, we commit today that we will go out of our way to free the Ndokwa nation and its people from suppression and oppression that has manifested in extreme marginalization. We shall continuously engage and work with all the established Unions that represent you, inclusive of Ndokwa Neku Union (NNU), Ndokwa youths on the platform of Ikolobie Ndokwa, and many others to ensure that we work on a collective and harmonious understanding, and to see that both the state and federal government begin to tackle many legacy challenges that still exist in Ndokwa land today.

“We will carry your pain in our hearts and take the responsibility of relieving you of many years of neglect and disappointment. We will stand with you through thick and thin, and never lose focus until your tears are turned to joy. In truth and with our firm commitment, I make bold to say “Ndokwa shall smile again.”

Earlier the LP Chieftain and Member of the Presidential Campaign Council, Chief Kenneth Olise while thanking the Delta State LP Gubernatorial Candidate, for honouring the reception, described Pela has a very credible personality that also has a solid technocrat, Prof. (Mrs) Nwabogo Umukoro from Ndokwa nation as his Deputy.

He vowed that the entire Ndokwa nation will vote for Peter Obi and all Labour Party candidates as the party has come to remove Nigerians from the shackles of political cabals, urging Deltans to rise up to vote enmass for Peter Obi as President, Deacon Kennedy Pela Delta Governor and all LP Candidates come 2023 in other to gain victory.