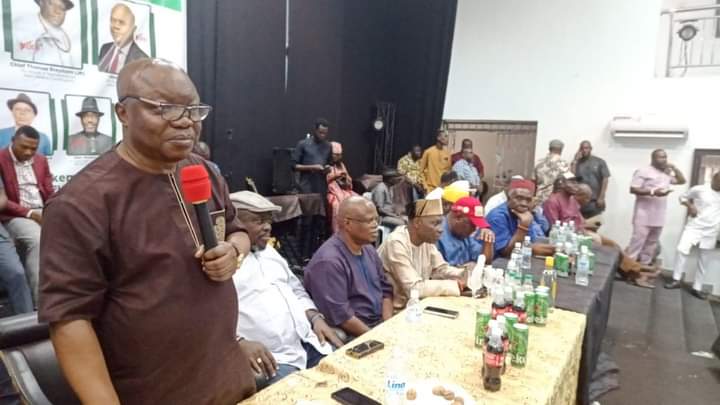 He gave the endorsement at a stakeholders meeting of the party held in Warri to flag-off ward-to-ward campaigns for the 2023 general elections.

The former Governor said Deltans were lucky to have Governor Ifeanyi Okowa as Vice-Presidential candidate of the party and urged all aggrieved party men to sheathe their sword and unite for the party’s victory.

He said that since Okowa emerged Atiku’s running mate nothing has been heard from leaders of the party in the state and urged all the leaders to work together to ensure victory for all party candidates.

He appealed to all members of the party to allow peace reign in the party adding that power belongs to God.

According to him, PDP built some of us and whatever we can do to build the party we will continue to do our best. From the bottom of my heart I sincerely thank all of you for coming to this major reconciliatory meeting.

“It wasn’t by my power that I saw power, it was by the grace of God that I became Governor some years ago.

“Since he emerged Vice-Presidential candidate of our party, nobody has heard from us (leaders) and it is not good for our Governor and our state.

“We must thank God that we are privileged to have Okowa from our state on the presidential ticket and we have no option than to support that ticket because of him. We must all line behind him and give him our support,” he said.

While endorsing the governorship ticket of the PDP in the state, Uduaghan advised against anti-party activities adding that it doesn’t pay to deliver candidates of other political parties.

“Coming back to our state, in every transition there must be crisis, its not always an easy ride for anybody. You will recall the trouble i went through to become governor.

“Now that the Supreme Court has decided, we must all come together to deliver our candidate. I am saying this with all seriousness and from the bottom of my heart.

“We must all come together and deliver our candidates, you can’t say the candidate is not my choice so I will not deliver him.

“If you help to deliver the candidate of another party, he already has his constituency and followers and he will not leave them to come and attend to you.

“A few people may benefit but majority will not benefit so its better to deliver the candidate of your own party.

“I am standing here to say this things so that people should stop spreading unnecessary rumours. Let us come together and work to move the party forward.

“Let us ensure that our voting units are not found wanting by delivering in our various units because the PDP is the party on ground in this state.

“The Governor has a lot to do outside the state and we have a duty to hold the state for him to ensure that we deliver the party in all the elections,” he stated.

Earlier, Delta South Chairman of the party Chief Julius Takeme said the meeting was to plan towards the commencement of the party’s ward-to-ward campaigns for the 2023 general elections.

He commended party leaders and stakeholders for their support over the years and urged them to double their efforts to deliver massively for the party.