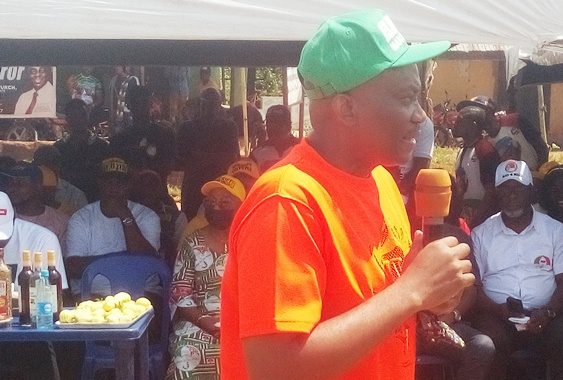 …Campaigns for Party in Delta North.

The Minority Leader of the House of Representatives, Rt. Hon. Ndudi Elumelu, has expressed confidence that Nigerians will vote out the ruling All Progressive Congress (APC) at the Federal level in the February 2023 Presidential Election, saying that the APC Government has brought untold hardship and retrogression to Nigerians.

Elumelu spoke on Tuesday, November 8, 2022 while canvassing for votes for candidates of the Peoples Democratic Party (PDP) at the Delta North PDP Ward-to-Ward Campaign in Aniocha/Oshimili Federal Constituency, Delta State.

Elumelu, who was in the Delta North PDP Campaign train led by the Senatorial Chairman, Elder Moses Iduh, visited 10 Wards in Aniocha North Local Government area within a period of two days where he harped extensively on the need for Nigerians, particularly the people of Delta State to ensure that they returned PDP to power to rescue and reset Nigeria.

The Minority Leader stated that when PDP comes on board in 2023 with Atiku Abubakar as President, he will unite the country and ensure that every Nigerian despite their state, region, or faith will be carried along.

He assured that the PDP when voted into office will open up the system and provide facilities to Nigerians particularly in small and medium enterprises including petty traders and artisans to enhance their businesses and boost the national economy.

Elumelu stressed that Atiku Abubakar will provide good and effective governance where fairness, justice and security will be the order.

The federal lawmaker called on the people of Delta North to reciprocate the good gesture of the PDP in making their son and the Governor of the State, Sen. Dr Ifeanyi Okowa, the Vice-presidential candidate. He described Governor Okowa as a nationalist who has helped in no small measure in the transformation of Delta State particularly through the Stronger Delta Agenda.

While canvassing for votes for the PDP Governorship Candidate in the State, Rt. Hon. Sheriff Oborevwori , the Deputy Governorship Candidate, Chief Monday Onyeme, the Delta North Senatorial Candidate, Hon. Ned Nwoko and the Candidate for the State House of Assembly for Aniocha North State Constituency, Hon. Engr. Emeke Nwaobi, Elumelu, who represents Aniocha/Oshimili Federal Constituency in the House of Representatives stressed that a vote for him to continue in the House of Representatives means a vote for more infrastructural development, more empowerment for the people and more youth inclusiveness in politics and governance.

He further explained why the PDP will be voted overwhelmingly by the people of Delta State and Nigerians across the country in the 2023 general elections.

“In 2015 we had good roads, today federal roads are dead traps; from Benin to Onitsha is not passable. It is only being managed. We cannot even assess Agbor to Abuja. It was not the case before. Under the APC Government, they no longer service the roads.

“The educational system is in shambles, your children who are in the university stayed at home for almost nine months. The APC government is unconcerned about the plight of the people.

“Under the APC our Aviation sector is suffering a direct hit to the extent that a ticket from Asaba to Lagos or Abuja now costs about N120,000. That was not the case in 2015,” Elumelu explained.

The federal lawmaker also lamented that hospitals under the APC Government are left with no drugs and basic equipment.

“Even the President, President Muhammadu Buhari is in London as we speak for medical services” he said.

Elumelu recalled the efforts of the Minority Caucus in the House of Representatives to ensure credible election in 2023 and urged Nigerians to take advantage of the reforms achieved.

“If you recall, before we passed the Electoral Bill into law, I took members of the Minority Caucus of the House of Representatives to walk out on the House because they were refusing the issue of the electronic transmission of election results. We insisted and since we were able to enforce it, you have seen what happened in Osun State where they thought they could rig the election.’

Elumelu said emphatically that rigging can no longer take place in Nigeria, based on the fact that the people have seen the light.

The Minority Leader bemoaned the insecurity situation in the country and said that people are not safe even in their houses and cannot freely move around the country. He lamented that the APC-led Federal Government has no value for the lives of Nigerians.

The Minority Leader also knocked the APC for its insensitivity towards the cultural and religious sensibilities of Nigerians.

“We know that Nigeria is a secular State where everybody is entitled to his or her faith or religion, but APC in total disregard and disrespect to the sensibilities of Nigerians came up with a Muslim -Muslim Presidential ticket.

“The APC is not a Pan Nigeria Party and that is why they have been rejected by Nigerians.

‘I have the confidence that come 2023, PDP will come out victorious in the general elections. With the situation on ground in Nigeria, anybody voting APC does not mean well for himself or herself, and the entire nation” Elumelu stated.