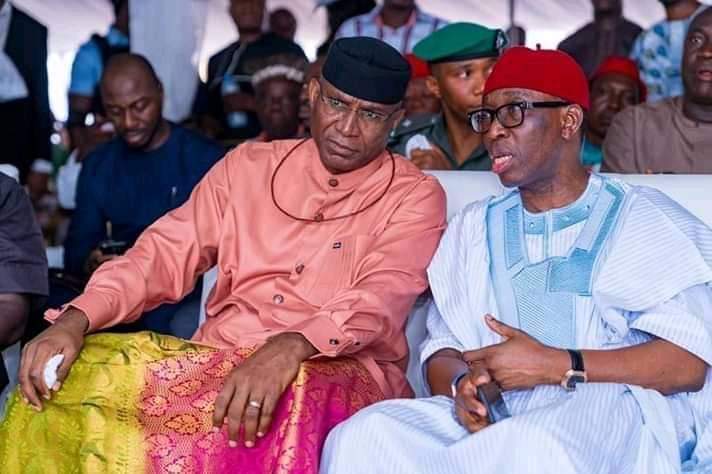 The Delta state chapter of the Peoples Democratic Party, PDP, has slammed Deputy President of the Senate and All Progressives Congress APC Governorship candidate in the state, Senator Ovie Omo-Agege, over comments threatening to terminate Governor Ifeanyi Okowa’s Vice-Presidential ambition.

In a statement on Wednesday, November 8, 2022 by the Chairman Media and Publicity Committee of the PDP Campaign Council in Delta, Chief Emman Amgbaduba, the party said Omo-Agege lacked powers to stop Okowa’s vice-presidential bid.

Amgbaduba, who is Commissioner for Oil and Gas in the state, said that Omo-Agege’s verbal attacks on Okowa were the last kick of a dying horse, adding that the PDP would retire him from politics in 2023.

He said that it was numb for the DSP to have made allusions of a third term agenda by Governor Okowa, and described it as mischievous propagation by the APC governorship candidate.

“We have watched Omo-Agege boasting about terminating Okowa’s Vice-Presidential ambition and also accusing him of having a third term agenda.

“First, Okowa has no such agenda as the PDP has a well respected governorship candidate in the Speaker of the State House of Assembly, Chief Sheriff Oborevwori.

“Instead of Omo-Agege to tell Deltans about his agenda for the development of the state, he goes about boasting about how he will terminate Okowa’s ambition to become vice-president.

“The last time I checked, Okowa isn’t in the ballot with him for the Delta guber race and let me make it clear to him that PDP with the support of the people will teach him a political lesson in 2023.

“We will help him retire to his Orogun village were he channeled the little projects and institutions he managed to attract to his Senatorial District,” Amgbaduba said.

He said Omo-Agege who supported Senate President, Ahmed Lawan for President cannot do a volte-face to accuse Okowa of betraying Southern Nigeria.

“Okowa didn’t betray anybody, the party threw its ticket open and a Northerner in Atiku Abubakar won the ticket and constitutionally a Vice presidential candidate must emerge from the South and Okowa was found worthy after careful evaluation by the candidate and the party.

“Rather than rejoice with Okowa and put political sentiments aside to ensure that a Deltan emerged Vice-President in 2023, he is busy lying to Deltans about an alleged betrayal that never existed,” he stated.

He called on party faithful and Deltans to disregard Omo-Agege’s phantom lies and support the PDP to rescue, reset and rebuild the country from the deep valley the APC had led the country into.