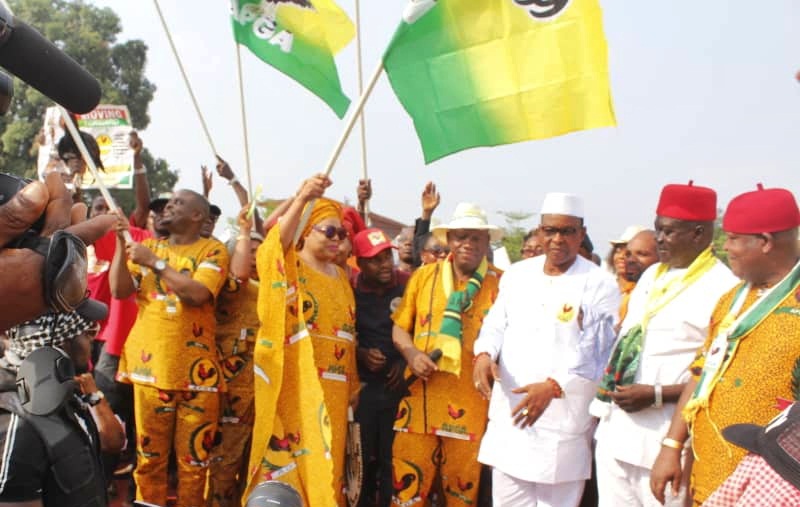 The All Progressive Grand Alliance, APGA has thrown it’s weight behind the reelection of Dr Ifeanyi Okowa for another tenure in Delta State in the spirit of equity, fairness and justice.

The National Chairman of APGA, Dr Victor Oye stated this at Ogwashi-Uku, Aniocha South local government area while flagging off campaign and presentation of flags to Hon Angela Nwaka as the party’s candidate for the Aniocha South Constituency in the 2nd March 2019 Delta State House of Assembly election.

The flag off event witnessed a mammoth crowd drawn from the various units and wards in Aniocha South local government area and other parts of the state with various supports groups, party leaders, youths and women.

The APGA National Chairman, represented by the National Vice Chairman, South South, Chief Tony Ebuka said the good work and leadership qualities of Governor Okowa was clearly evident in all parts of the state, hence the support of the party for his reelection.

Dr Oye noted “APGA does not have a governorship candidate in Delta State”, stressing that the party has not entered into any alliance with the ruling All Progressives Congress, APC for any elective positions as being insinuated.

The APGA National Chairman called on the people of Aniocha South to vote for Hon Angela Nwaka and other candidates of the party, adding “APGA had what it takes to give effective representation as it was the only party with alternative to the challenges confronting the country”.

The State Chairman of the party, Hon Afamefune Enemoku said “APGA believes in equity and fairness as it was necessary for Delta North to complete its two terms as governor of the state as Delta Central and South senatorial districts did from 1999 to 2015″. It is the turn of Anioma and APGA is behind Governor Okowa to complete his second term”, stressing that the party was the third largest party in the country with a Governor, Senator, House of Representatives and several House of Assembly members as well as local government chairmen even in Abuja municipal council.

He told the people that Hon Angela Nwaka was the better deal to represent Aniocha South in the State House of Assembly.

The Member representing Aniocha South in the State House of Assembly and APGA flag bearer for the March 2 House of Assembly election, Hon Angela Nwaka said she was seeking reelection to enable her consolidate on her various achievements.

Hon Nwaka noted “my lofty programs of empowerment, effective and robust legislative representation will not be truncated. Aniocha South deserves nothing less than the best at all times. I call on my people for their massive support. They are with me always. My return to Delta State House of Assembly is their project and collectively we shall get there. Victory is sure as God who started it will see to its successful end”.

The lawmaker said there was no vacancy in Government House as Governor Okowa who had performed creditably in the areas of road infrastructure, human capital development, healthcare, youth empowerment, peace building and security, urban renewal among others will return to consolidate on his achievements.

Hon Nwaka who is the Chairman, House Committee on Education, thanked the people of Aniocha South for their encouragement all through the years promising to do more, adding that Anioma agenda must be supported to complete eights years in government House.

The highlight of the flag off was the presentation of flag to Hon Angela Nwaka as the APGA candidate for Aniocha south constituency seat.

The party also presented flags to its candidates for some House of Assembly seats including Oshimili south, Oshimili North, Ika South, Ika North East and Sapele.