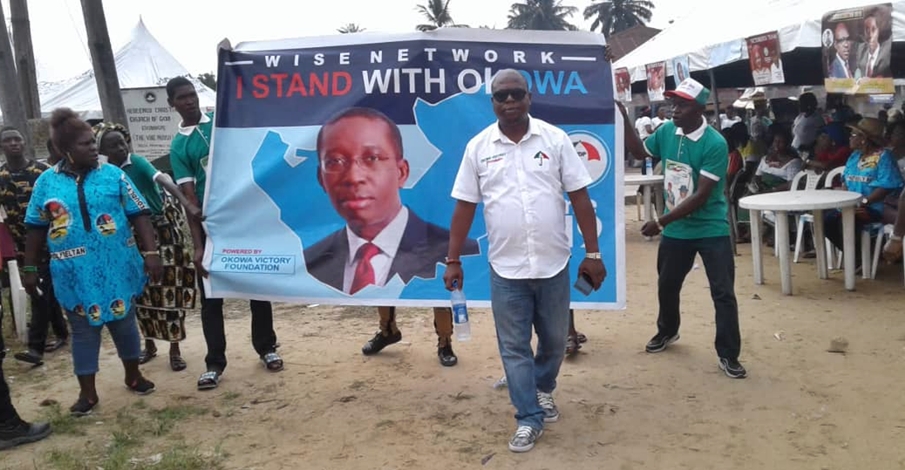 Barr. Nomuoja while speaking to journalists during a warm up rally at Ekrokpe town in Ekakpamre ward, Ughelli South, stressed that ‘Victoria Ascerta’ is the position of Okowa’s reelection.

According to him, “if elections are determined by the quality of campaign leaders, then with the calibre of leaders campaigning for the governor’s re-election in Ughelli South, it is safe to say his re-election is a done deal.”

Nomuoja who is also the Delta Central Coordinator of Wise Network – Okowa Victory Foundation, added, “Ughelli South is one of the foremost local governments without solid opposition due to the doggedness of its PDP stalwarts headed by the erudite professor of Law and Senior Advocate of Nigeria, Amos Agbe Utuama who also doubles as the Chairman of Ughelli South PDP campaign council.”

He further asserted that the composition of the Ughelli South PDP Campaign Council under the leadership of Hon. Taleb Tabite, the Iroko of Ughelli South politics and empowerment master is one of the best decisions the Delta state PDP has taken to ensure a hitch free re-election of Governor Okowa in Ughelli South.

“For the first time, Ughelli South Women have also been very active in moving the Campaign of His Excellency, Governor Ifeanyi Okowa to every nook and cranny of the state under the leadership of Olorogun Mrs Grace Aghoghovbia. On Tuesday the 29th of January 2019 the good people of Ughelli South will be conducting the mother of all rallies in ensuring our SMART Governor’s easy sail and land slide victory at the forth coming Election.

“An array of Leaders like Olorogun John Oguma, Senator Emmanuel Agariavwodo, Maj Gen Unuode rtd, Col Ideh rtd, Olorogun Kenneth Gbagi, Barr Peter Mrakpor, Chief Unuame, Chief POE Okitakpe, Chief Newman Ighedo, Chief Ewenede and a host of other leaders too numerous to mention are expected to grace the occasion. The stage is finally set for the mother of all rallies ever staged in the history of Delta State.” Barr. Nomuoja informed.