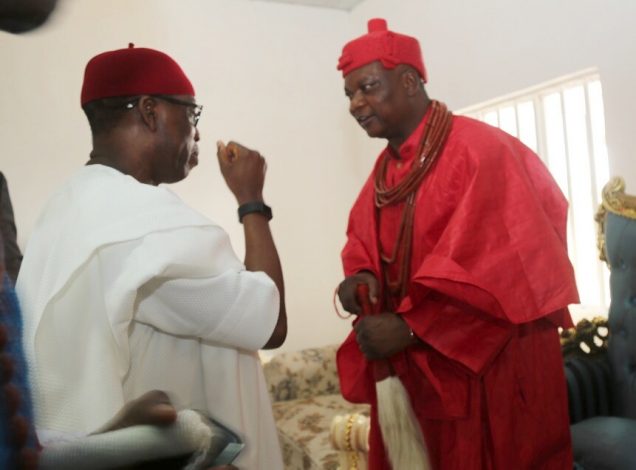 The event which held at the Palace of the Ovie of Agbon Kingdom, Ogurime’ rime, Ukori, in Isiokolo, Ethiope East Local Government Area, was well attended by top government officials , traditional rulers and prominent Deltans from all walks of life.

Speaking at the occasion, Governor Ifeanyi Okowa called on public spirited individuals and politicians to consolidate on government’s developmental efforts in their communities.

Governor Okowa said that the State Government would continue to bring development to all parts of the state despite biting economic recession and urged Deltans to join government in empowering communities.

“We are trying to empower our youths so that they can create jobs for themselves and others. We will continue to engage our people from Agbon kingdom as their relationship with the government will help to empower the communities”, he said.

James Ibori and Ifeanyi Okowa at the 2017 Agbon Day Celebration

Speaking further, he said that government has embarked on the construction of the Okpara-Samagidi road and the Ekrerhavwe-Isiokolo road among many other projects in the area, stating “We are taking the development of Ethiope East holistically, as we are working in Agbon Kingdom we are also working in Abraka Kingdom. We have awarded two township roads in Abraka and the contractors have since moved to site”.

He thanked the Agbon Monarch for acknowledging the development efforts of former Governor James Ibori, stressing that ” As a state, we must continue to consolidate on the gains of the foundations of what our leader Chief James Ibori has done since 1999.”

On the electricity challenges facing the people of Agbon kingdom, Governor Okowa promised to discuss with the Benin Electricity Distribution Company BEDC to restore electric power to the community, and called for prompt payment of electricity tariff by the communities.

The Ovie of Agbon Kingdom HRM Ogurimerime, Ukori I said the grand reception was organized to welcome Governor Okowa to Agbon Kingdom and commended Governor Okowa for the developmental strides in the community while pledging the support of his people to his administration.

He lamented the lingering problem in the power sector and called on the Federal Government to declare a state of emergency in the sector and provide a lasting solution to the problem.

The Chairman of the occasion, Chief Johnson Barovbe called on youths of the Kingdom to remain peaceful to attract investors and fast track the development of the community.