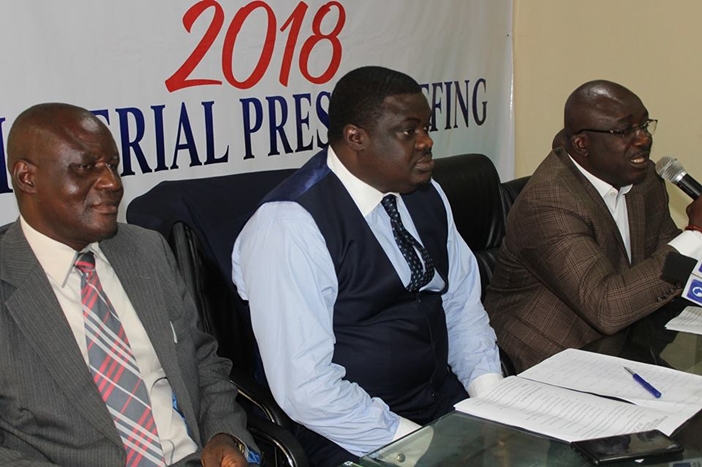 The Commissioner, Directorate of Youth Development, Hon. Oghenekaro Ilolo has commended the State Governor, Sen. Dr. Ifeanyi Okowa for adopting a dialogue approach to ending militancy in the Riverine part of the state which has led to the revival of the Nation’s revenue.

Hon. Ilolo made this commendation at the 2018 Ministerial Press Briefing of its Directorate at the Conference Hall of the Ministry of Information, Asaba, stressing that, the Directorate through concerted efforts with the various Ministries and Parastatals of the State Government, has been to arrest the issue of youth restiveness in the state.

While highlighting the achievements of the Directorate during the year under review, the Commissioner frowned at some set of youths who go about visiting political and government offices, begging for money and advised them to desist from such act by getting engaged in the various youth empowerment programmes initiated by the Okowa led Government.

He tasked politicians to stop throwing money at these set of youths who have refused to accept repeated offers of developing themselves with various craft and skill acquisition programmes littered across the state.

According to Illolo: “The Directorate through the effort of the Honourable Commissioner of Youth Development has been making sure that there is no youth restiveness in the state. The Directorate was able to nip in the bud the election crisis among the youths in Amai, Oko, Okpanam, Umuebu Kingdom.

“In 2017, His Excellency Senator (Dr) Ifeanyi okowa, inaugurated a State Steering Committee on Special Youth Intervention Training and Empowerment Programme to complement the efforts of the Office of Job Creation in the training of unemployed youths with the Honourable Commissioner for Youth Development as the Chairman. Currently, 200 youths are being trained on various skill areas in the Sate Skill Acquisition Centres and under registered Master Trainers across the Sate.”

He disclosed that the ugly event which trailed the January 2017 congress of the National Youth Council of Nigeria (NYCN) Delta State Chapter, has been solved by the Directorate.

On its contribution to the revenue of the state, the Youth Commissioner disclosed that the Directorate through the registration of Youth Organizations and their subsequent renewal, generated the sum of N3,702,000.00 for the period under review. Adding that, the Directorate in 2017 disbursed an annual subvention of N100,000.00 to 46 recognized Youth Voluntary Organizations in the State to encourage them in carrying out their humanitarian services.

He further informed that the Directorate through the Youth Development officers at the Zonal offices, has been monitoring the activities of the various youth organizations with the view of encouraging them to key into the present administration’s SMART Agenda of Wealth creation through Agriculture, Skill Acquisition and Micro Credit loan for Small and Medium Scale Businesses.

Hon. Oghenekaro Ilolo while expressing joy at the drastic reduction of the ugly trend of ‘DEVE’ collections by youths within the Uvwie axis of the State, hinted that the State Assembly will soon roll out laws that will criminalize such acts. Adding that, the Directorate in conjunction with the Delta State Youth Council has in recent times organized Sensitization and Awareness Campaign against Cultism for youths at the three Senatorial Districts of the State.