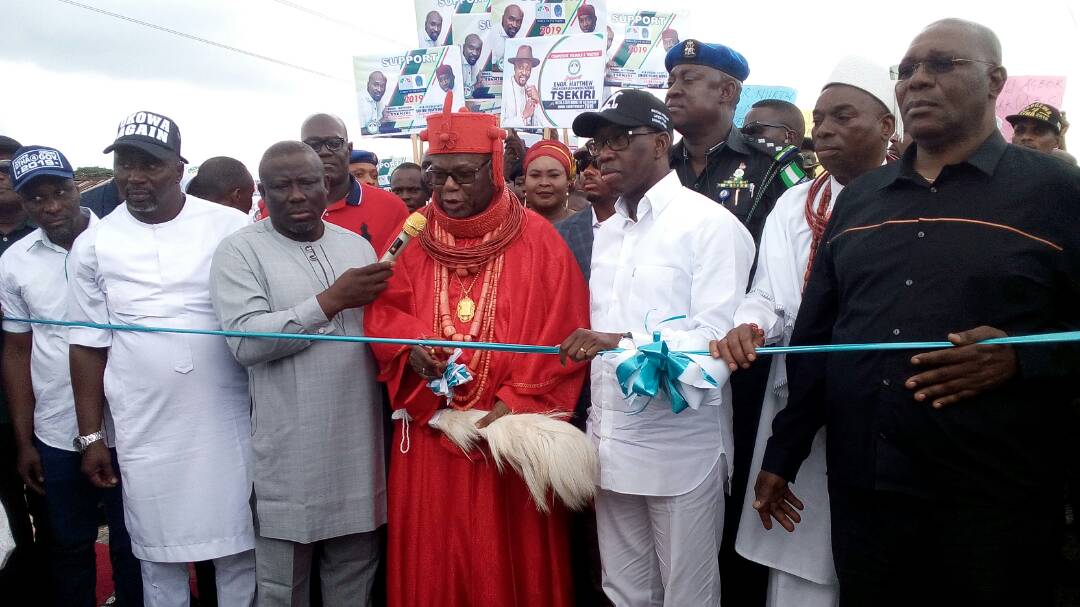 … We’ll Give Okowa 100 Percent of our Votes, Eramadawa Assures

The traditional ruler of Uvwie Kingdom in Delta State, His Royal Majesty Emmanuel Sideso, Abe 1, has praised the Delta State Governor Sen. Dr. Ifeanyi Okowa on the occasion of constructing, completing and commissioning of Ugbomro access road in Uvwie Local Government Area, describing the Governor as a great friend of Uvwie Kingdom.

The Uvwie Monarch made this submission at Ugbomro during the commissioning of a historic gigantic access road project conceived and executed by the Okowa led administration which was abandoned by past administrations.

He appealed to Governor Okowa to help direct the completion of the abandoned Maternal Childcare at General Hospital Ekpan which according to him is strategically positioned to cater for healthcare delivery in the area and beyond, he however pledged to continually support the governor to succeed in his quest of developing the state.

His Royal Majesty, Abe 1 highlighted some infrastructures that requires the state government’s attention to include: Effurun-Warri Sapele road reconstruction and fixing of failed portions at Jakpa junction, Airport junction as well as fix flood prone areas in the local government area.

Mr. Eramadawa commended the governor for coming to their aid by writing his name in the book of history in the state, he lauded the community youths and other stakeholders for cooperating and as well providing peaceful environment while the project lasted.

The Ugbomro PG urged all Uvwie sons, daughters and all Deltans to rally around Governor Okowa’s administration in order to get more development projects in all areas across the state.

The Unuevwero of Uvwie Kingdom and Ugbomro Community, High Chief Ambrose Olughor, described Dr. Ifeanyi Okowa as the greatest man he has come across in recent time, adding that when the governor came onboard he promised to construct the road within his first tenure, noting that “Okowa has kept to his promise, he is a promise keeper, he delivered within two years in office”.