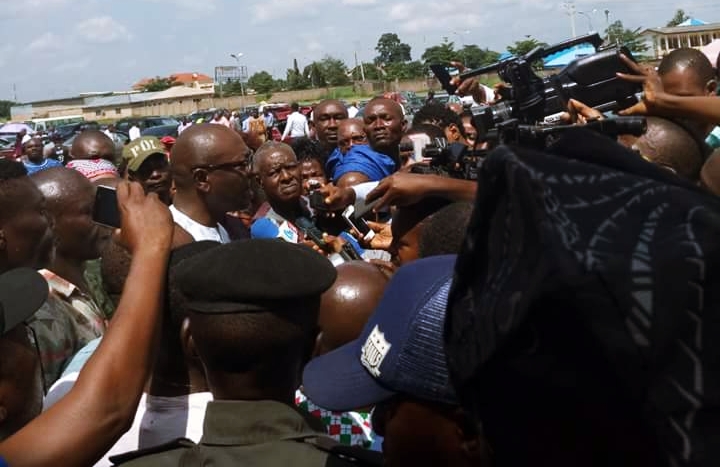 Governorship candidate of the Peoples Democratic Party (PDP) in the September 28, 2016 Edo State Governorship Election, Pastor Osagie Ize-Iyamu on Tuesday charged members of the party in the state to remain focused and committed to the course of the party and work ahead the 2020 governorship election adding that the four years of the leadership of the All Progressives Congress in the state is not forever.

He gave the charge  at the Benin City Airport shortly after being received by party faithful.

He said he has put the past behind him and he has sent Governor Godwin a congratulatory message as widely done in the civilized world.

“Well, we have done an election and the law says if you are not happy with the outcome, there are processes to be followed and we have followed it. We have gone to the tribunal, we have gone to the court of appeal and the supreme court. After the supreme court, there is no other place to go. And rather than continue to quarrel, we just put it behind us. We have sent him a letter of congratulation”, he said.

He said the task before the current government of the state led by the APC is to see that the party delivers on its electoral mandate and failure to do that gives the opposition an edge in the forthcoming election.

“The challenge for those who are in government now, is to do well and to ensure that by the time we come back again for election, they will be able to justify their position in government, but to our people, this is just the time for us to thank God. But what has impressed me the most is that our people never went violent”, he said.

Ize-Iyamu encouraged the PDP faithful in the state never to see the party losing at the Apex Court as a defeat noting that they have never been defeated but to work assiduous ahead of the 2020 governorship election in the state.

“Our party people, well I want to tell you that you have not been defeated. Edo people knew how the election went and I believed that they can hold their heads high. Four years is not the end of the world. In the next three, four years, we will do an election again in the state”, he said.

He thanked the party faithful for being  there  for him at all times and also serving as his own source of inspiration all these while.

“Well, I am overwhelmed and I thanked them from the bottom of my heart from the very beginning, they have been the source of my inspiration and I remain grateful to them for their steadfastness j and support in spite of all that we have gone through. I am very grateful and I thanked them.

“And we have told our people to remain steadfast and our prayer is that he will rule Edo State well and we move on. We give all the glory to God”, he said.