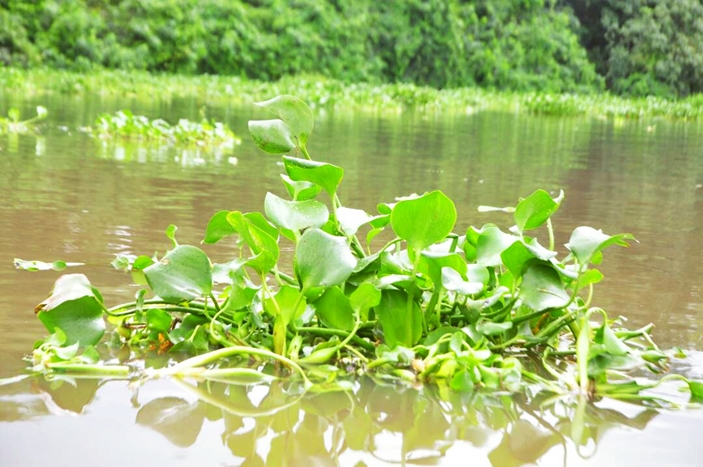 Operators of water transportation in Delta State have applauded the effort of the State Government through the intervention of the Delta State Oil Producing Areas Development Commission, DESOPADEC to clearing the waterways of Aquatic Weeds that had hampered free flow of movements in the rivers.

The people, including fishermen, boat owners, traders and residents of riverine communities, told journalists in Warri that for about seven years now that DESOPADEC brought in Aquatic Weed Harvesters to combat the weeds in the riverine areas of the State, the method have drastically reduced the growth of aquatic weeds in the Warri river and its environment.

A Boat Owner, Mr Tony Mafolabomi, said “The introduction of this equipment by DESOPADEC is a noble one. It had helped opened the waterways to enable us gain access to the creeks and outlets along the Warri rivers. Our Canoes and Boats now sailed better as Aquatic weeds that use to impede the free flow of water were being cleared regularly. My concern is that the equipment are very insufficient. Only this Pessu market area requires about five Aquatic Weed Harvesters but presently only two are covering the whole Warri River. I appeal for more of the equipment to be deployed to other riverine areas of the state as water hyacinths had taken over most of the rivers”.

Mr Tosan Mamah, Chairman Pessu Market Association, pointed out that the equipment are virtually not enough, stressing that most of the oil producing areas are not beneficiary to the laudable project which he said had increased socio-economic activities in communities along Warri riverine.

“Water Weeds have completely blocked some creeks in the state and the development had hindered economic activities in those areas. The state needs more fleets and different sizes of Aquatic Weed Harvesters to curtail menace of water hyacinth, including those that can manoeuvre in smaller creeks were there are aquatic weeds. We expect more government intervention in that regards”. Mamah stated.

Continuing “Before now the Warri river was highly polluted with aquatic weeds, mostly water hyacinths and algae. It became a serious menace for a period of time and the Pessu, Ogbe-Ijaw, Ugbuwangue, Aladja, Ekpan and Ode Itsekiri axis were serious affected by the aquatic weeds. If not for the introduction of the two Aquatic Harvesters Machines by the State Government through the Delta State Oil Producing Areas Development Commission all the markets could have been closed”.

Another Boat Owner, Mr Daniel Chobor, appealed to the state government not to under estimate the importance of the needs to curb aquatic weeds in rivers and creeks of the state, stressing that the operations of Aquatic Weeds Harvesters is of great importance to the markets and boat users as well as communities along the Warri river as it directly affect their socio-economic lives.

A Water Transport Workers, Mr Raymond Diogba who spoke in same vein stated that the introduction of the Aquatic Harvesters Machines into the Warri river and its environs was a major step in the control of aquatic weed in the water ways.

He stated that the harvesters are strategically placed, properly operated and managed by a reputable company because according to them, the machines resumes 8am and closes at 4pm daily.

“Before now we have been spending all our daily proceeds on repairs of engine and boats. Even distance we usually cover for 40 minutes, now that the Aquatic Harvesters Machines are working, we cover it for just five minutes”.

“We appeal to our amiable Governor, Senator Ifeanyi Okowa to sustain and continue with the exercise to enables us continue to enjoy water transport business in Warri and it’s environs”, they added.

A trader, Mrs Stella Emasuen commended the past efforts of the state government in combating the menace of Aquatic Weeds in the river and stressed the need for more of the Weed Harvesters to be able to tackle the challenges posed by the water hyacinths.

“State water ways should be free from Aquatic Weeds and all its challenges. The task is enormous but we know our performing governor will answer us with more Aquatic Weed Harvesters to constantly clear the problem. Some times this water hyacinths cover even the jetties and submerge the boats. We call Okowa ‘Road Master because of how he is constructing roads. Let him come and show us skill in the water, we will give him a name too”.