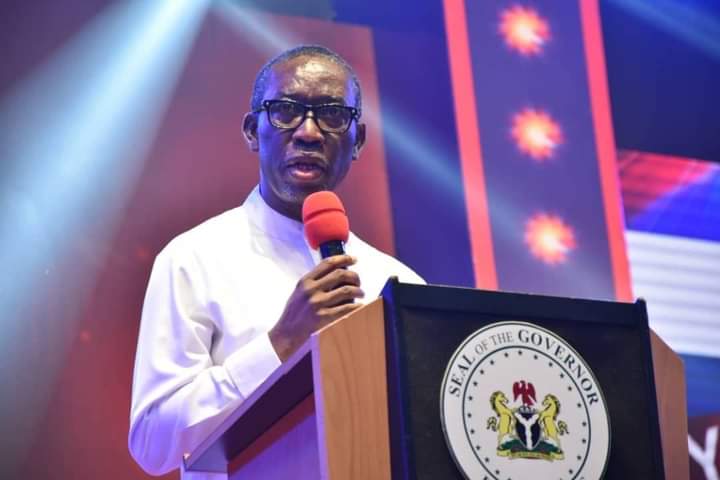 Governor Ifeanyi Okowa of Delta and Vice-Presidential Candidate of the Peoples Democratic Party (PDP) on Tuesday, July 05, 2022 debunked reports that he had no West Africa School Certificate (WASC) certificate, saying he made the second best result in his set in the country in 1976.

He said that the issue around the certificate was deliberate wrong perception and unnecessary politics, and explained that virtually all universities in the country offered him admission based on his outstanding performance in WASC and Higher School Certificate (HSC) examination.

Okowa made this known while speaking to journalists after inspecting ongoing projects at the Delta State University of Science and Technology, Ozoro in Isoko North Local Government Area.

He said: “On the issue of my certificate, I think it is a misconception. People try to play politics with everything.

“Yes, I lost my WAEC certificate, but I have the print out from Edo College, Benin City, which clearly stated that I have distinction in all subjects.

“The Higher School Certificate was attached and it has been acknowledged by Edo College and the school put it out there that I made an ‘A’ `B’ `B’.

“I do not pride myself but it was very difficult to make such grade in higher school at that time.

“My high school result was the second best nationally in 1976, when I finished. So, many universities admitted me through Telegram as at that time, and I had to start making choices of which to accept.

“Of course, it’s very clear that I finished medical school at the University of Ibadan. I was 21years and some months; I was less than 22 years of age.’’

On the ongoing strike by the Academic Staff Union of Universities (ASUU), the governor called on the Federal Government to expedite action in resolving the issues, adding that every government should be sincere enough to keep to promises and agreements at all times.

“We continue to sympathise with our students who have been at home for several months now rather than being in school.

“I use this opportunity to call on the Federal government to do something urgently to end the strike.

“It’s not a good thing for the children, parents and even education in general. It is unfortunate that the Federal government has not been able to attend to issues, as requested by ASUU.

“For every government, if promises are made, we must ensure that we keep to our promises and if there are things that cannot be done, you let people know,’’ he said.

Okowa remarked that lecturers were not on strike in the four universities owned by the state, “for us in Delta State, we are fulfilling all the requirements and that’s why you can see that this university and our three other universities are all active and in session because we do not have any issues with our lecturers.

“All our four universities are in session because we pay special attention to education in Delta State, and our Presidential Candidate, Alhaji Atiku Abubakar, has also assured that education occupies a prime position in our `Rescue Nigeria’ mission.’’