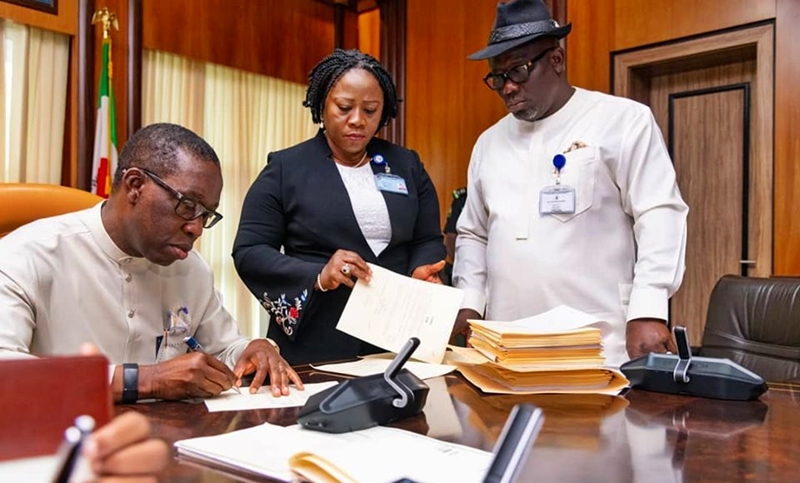 Delta State Governor, Senator Dr Ifeanyi Okowa on Thursday, May 16, 2019 signed six bills into law, stating that with the cooperation of all arms of government a stronger state would be built.

The governor who spoke after assenting to the bills, observed that it was a collective responsibility for all Deltans to contribute towards building a virile state that will be the pride of all.

Speaker of the Delta State House of Assembly, Rt. Hon. Sheriff Oborevwori who was accompanied by his Deputy, Rt. Hon. Friday Osanebi and other principal officers of the legislature, presented the bills to the governor.

One of the bills which has now become law is the Warri/Uvwie and Environs Special Area Development  Agency bill.

According to the Governor, “The Warri/Uvwie and environs development agency law was initiated following the successes recorded with the Delta State Capital Territory Development Agency. The law was borne out of the positive impact we have made in the development of the state capital using the Capital Territory Development Agency; in 2015, we saw the need for a special agency to handle the development of the capital territory, three years after, we have seen the positive impact this has made in Asaba and its environs”.

He continued, “I believe that from the beginning of my second tenure, we will pay special attention to the development of Warri, Uvwie and environs as I promised the people; this agency will ensure the maintenance of existing infrastructure and improvement of general infrastructure in the area,” he stated.

Other bills that were signed into law includes Bill to provide for the establishment of the Delta State Urban Water Corporation, Small Town Water Supply and Sanitation Agency, The Rural Water Supply and Sanitation Agency, The State Water Sector Regulatory Commission; Bill to Regulate the Registration, Establishment, Operations, Conduct, Monitoring and Inspection of Private Health Care Facilities in Delta State and other matters incidental thereto; Bill to Amend Delta State Capital Territory Development Agency; Bill to provide for the Audit of Public Accounts of the state Ministries, Departments and Agencies of Local Governments and other Matters Connected therewith; and the Bill to Establish the Customary Courts and to provide for the Composition and Appointment of Chairman and Members, Structure and Administration, Jurisdiction and other Matters Connected thereto.

Rt. Hon. Oborevwori while presenting the bills before they were signed into law, took time to extol Governor Okowa’s administration for working for the interest of the people of the state, disclosing that the bills passed through all the processes required in making laws.