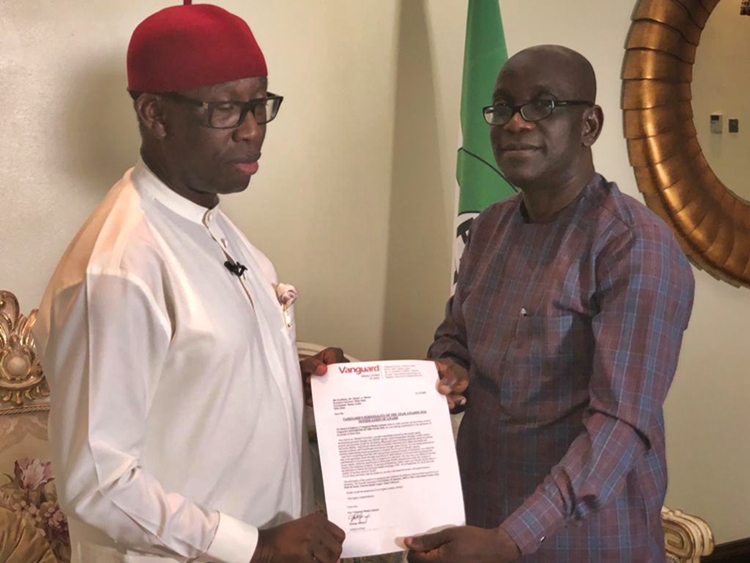 Delta State Governor, Senator Dr Ifeanyi Okowa has been nominated as Vanguard Newspapers’ Governor Of The Year 2018 by The Board of Editors, Vanguard Media Limited for his sterling contributions to the infrastructural and human capital development of the state.

Presenting the letter of nomination to  Governor Okowa, on Wednesday, December 12, 2018 at the Government House, Asaba, Mr. Gbenga Adefaye, Managing Director/Editor-in-Chief of Vanguard Newspapers Limited,  stated that the selection committee took the decision based on the “the pragmatism, commitment and courage” exhibited by the governor’ through his SMART Agenda, and for dutifully implementing broad programmes to actualise the 5-point SMART Agenda.

“The Board of Editors of Vanguard Media Limited writes to notify you that you have been voted as Vanguard’s Governor of the year 2018, for your sterling contributions to the upliftment of the people of Delta State. Apart from completing more than  296 road projects covering hundreds of kilometers; you raised the ante in the Agriculture sector through acquisition of 3,850 hectares of farmland and encouraged the establishment of rice processing mills to support rice cultivation, adding “we also notes your effort to develop human capital, which has transformed no fewer than 40,000 youths into owners of businesses and employers of labour.”, the letter signed by Mr. Adefaye said

“In the area of healthcare, Delta, under you, became the first state in the federation to launch the Universal Health Coverage, UHC. As at September 30, 2018, the total number of enrolees stood at 316,301. It is for these, and more, that we confer on you this well-deserved award with great honours. The philosophy of this award is to recognise and celebrate Excellence, National Pride and Service to humanity.” the letter stated.

It would be recalled that Governor Okowa emerged ‘Best Governor – Grassroots & People Development in the 2018 Nigeria’s Good Governance Poll,’ organised by the African Leadership Magazine UK, the Independent Newspapers’ ‘Man of The Year, 2017’ award, the New Telegraph Newspaper Governor of the Year in Human Capital Development and Infrastructure, University of Ibadan 2016 Alumnus of the year award as well as the 2017 Dignity of Man Award by the University of Nigeria Nsukka.

Buhari, Okowa, Sultan Call For Unity As Olu Of Warri Marks 3rd Coronation Anniversary
Fidel Onwodi Urges Politicians to Have Other Streams of Incomes and Strive for Excellence
Advertisement