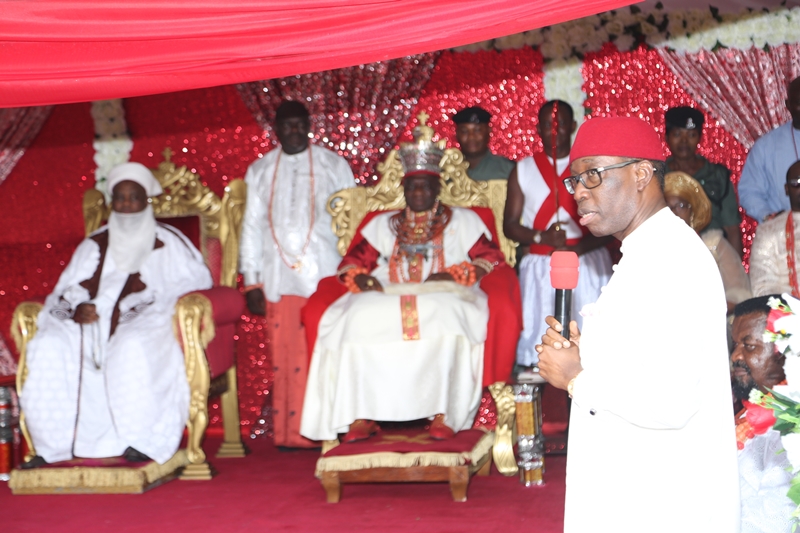 Delta State Governor, Senator Ifeanyi Okowa (right) and His Royal Majesty, Ogiame Ikenwoli the Olu of Warri Kingdom and His Eminence Sultan Muhammadu Saad Abubakar III, the Sultan of Sokoto during the 3rd Coronation Anniversary of the Olu of Warri.

They spoke at the 3rd coronation anniversary celebration of Ogiame Ikenwoli, the Olu of Warri. The event took place at the Olu Palace, Warri, Warri South local government area of Delta State.

President Buhari, represented at the occasion by the Minister of State for Petroleum, Dr Ibe Kachikwu stated that with peace, development will take place, noting that Warri contributes a lot to the Nigerian project.

He listed the dredging of the Warri Port, reactivation of Warri refinery, among others.

Governor Okowa in his speech at the occasion commended traditional rulers for building bridge of unity, noting that when different kingdoms are peaceful, the country would be peaceful.

The governor who congratulated the Olu for the anniversary, stated, “after your coronation, you went to visit several traditional rulers in the state and the country which has helped to create peace; we are happy for that gesture because, with peace development will take place.”

“We have promised to tell Deltans the truth; we will constantly fund the trans-Warri/Ode-Itsekiri road project because it is in the interest of the state, we are committed to doing what we ought to do,” the governor said.

The governor said his administration would promise to execute only projects it is capable of executing, asserting, “we will promise only those things we can do because it is honourable for us to do so.”

Sultan of Sokoto in his speech, stated, “if we want to have a good country, we should continue to reach out, no matter the religion or cultural belief; we believe in the unity of this country.”

“You cannot love God if you don’t love your neighbour, we want peace because, without peace, we cannot develop,” the Sultan said.

The Olu of Warri in an address read by Chief Brown Mene, said, “we want to put on record that our amiable state Governor, Dr Arthur Okowa has been doing a lot in the Warri axis since his election nearly four years ago; as we speak, work is going on earnestly on the Ubeji-Ifie road, which is one of the most important main arteries feeding the Warri Refinery and at least, three other major crude oil tank farms within the Kingdom.”