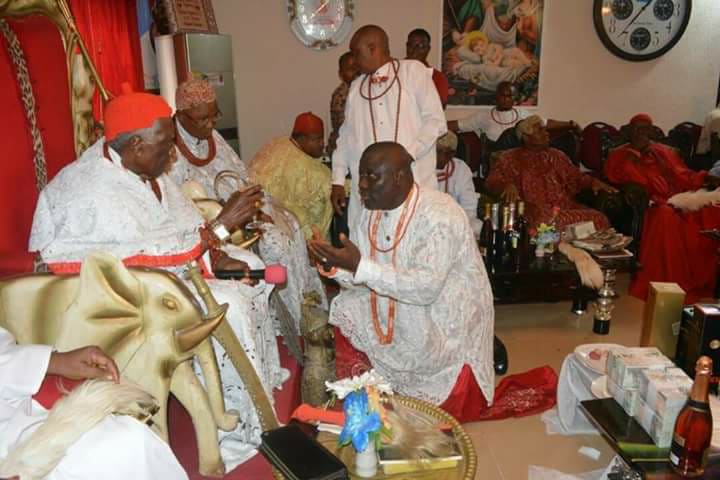 The Speaker of the Delta State House of Assembly, Rt. Hon. Sheriff Oborevwori has received the prayers and blessings of Urhobo Traditional Rulers Council, an umbrella body comprising all the royal fathers in Delta Central Senatorial District where they showered their blessings on him.

It would be recalled that Rt. Hon. Sheriff Oborevwori was elevated to the office of the Speaker of the Delta State House of Assembly May 11,2017, thus making him to become the number three political office holder in the state.

In humility and respect for the traditional institution, Hon. Oborevwori deemed it necessary to pay homage to the royal fathers to seek for their prayers, blessings and guidance in his new office.

Speaking during the visit at the palace of the Olomu monarch, HRM Ogbon Ogoni Oghoro I, JP, OON, the Owhorode of Olomu Kingdom in Ughelli South Local Government Area of Delta State, the  Speaker said he decided to seek the prayers and blessings of the royal fathers to guide him in his new assignment.

He said that; “I have come to meet with my fathers, the royal fathers in  Urhobo nation today to seek their prayers and blessings. I thought it wise to do so because it is part of our culture that a wise child should ask for his father’s blessings in anything he embarks on.

I have also come to introduce myself to my royal fathers as the new Speaker of the Delta State House of Assembly and to say that from time to time, I shall be visiting my royal fathers for their fatherly advice. I also want to say that whatever the Urhobo nation wants from the Delta State Government for the Urhobo nation to move forward is what I stand for. You are our fathers and whatever advice you give is what we shall abide by.

“I decided that in my capacity as the Speaker of the House of Assembly, I should first celebrate my position with my fathers before I extend it to kings from other parts of the state. I have come for your prayers because I am  aware that with your prayers I shall succeed”, he added.

The Speaker also used the occasion to request the royal fathers to support the government of Governor Ifeanyi Okowa, whom he said has performed beyond expectations, adding that he has catered for the interest of Urhobo in his government.

Responding, the royal fathers led by the Owhorode of Olomu kingdom, HRM Ogbon Ogoni Oghoro I, had earlier remarked that the visit of the  Speaker was unprecedented, adding that it was the first time a Speaker of the State House of Assembly was paying homage to the Urhobo royal fathers after such elevation.

In unison, all the royal fathers who, with their hands stretched towards the Speaker who was on his knees, prayed fervently for God’s wisdom, protection, knowledge and guidance in his political endeavour, praying that as he remembered the royal fathers, so God will remember him and his family.

They prayed to God to grant him the desires of his heart.

The Royal Fathers also took time to pray for the State chairman of the PDP, Olorogun Kingsley Esiso for God’s guidance and protection.