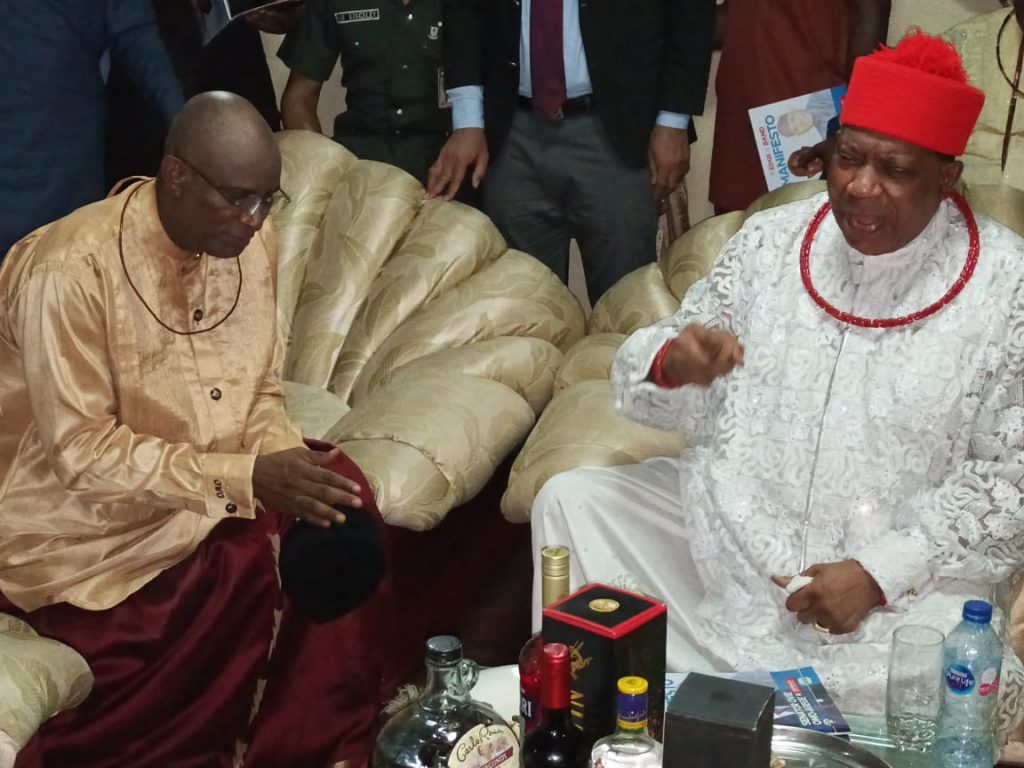 …says he is eminently qualified to govern Delta.

UPU leadership while lauding Omo-Agege for being the shining light of the Urhobo nation, noted that he is eminently qualified to lead the state in 2023.

President-General, UPU Worldwide, Olorogun (Dr) Moses Taiga, who stated this on Tuesday when Omo-Agege paid a consultation visit to the National Executive of the UPU at his country home in Okpare-Olomu urged the senator to go round and sell his manifesto to Deltans.

UPU also praised Omo-Agege for helping to strengthen the relationship between the Urhobo Nation and her neigbours in Delta State, the South-South, and across the country through his synergic and cordial relationship with groups and personalities.

According to the UPU PG, “I wish to commend Your Excellency, Senator Obarisi Ovie Omo-Agege, CFR, on your enviable services to the Urhobo Nation, and Nigeria as a Senator of the Federal Republic of Nigeria.

“I must commend you for your great work and achievements in your over seven years in the Senate. You have distinguished yourself as a worthy Urhobo Son.

“We thank you for the success in attracting the Federal Polytechnic, Orogun, the Nigeria Law School, and other projects to our dear Urhobo Nation. Posterity will accord you your rightful place in the history of our dear Nation.

“We admire your eloquence and boldness in presenting issues and Bills at the National Assembly.

“We are proud of your role in the past Constitutional Review exercise, and impressed with your efforts in the Nigerian Electoral Act of 2022, which has brought renewed hope to the country’s Electoral Process.

The UPU also thanks you for empowering Urhobo people, particularly the youths and our worthy professionals with jobs in Federal establishments. We also thank you for intervening and ensuring justice in instances when the rights of an Urhobo man are denied and brought to your notice.

We are grateful for your renovation and construction of new classroom blocks, including furnishing in many secondary and primary schools across Urhoboland.

Your Excellency, having listened to you, I must say that you are eminently qualified for the Office you seek. You remain the First Urhobo to occupy the exalted office of the Deputy President of the Senate and you have distinguished yourself in that position. As you aspire to be Governor of Delta State, I advise you to go round the nook and crannies of the Urhobo Nation and the entire State, marketing yourself to the people and convincing them to vote for you,” he added.

Earlier Omo-Agege accused the Okowa-led administration of amassing loans every day and squandering over #2.8 trillion in seven and half years of his administration.

According to him, “the Okowa-led administration is amassing loans every day. When Governor Uduaghan left office, he left N80 billion in debt obligation and people were shouting that he almost destroyed the state. Today, it’s about N400 billion. And if these loans are used for something you can see, nobody will quarrel with that. It is not a crime to take loans. America is indebted. It is one of the biggest indebted nations in the world.

“Some people have also alluded that ‘You are the Deputy Senate President, Buhari has been taking loans. Yes, I can tell you what those loans are being used for. Those loans are tied to projects. They are tied to the completion of rail projects, Lagos-Ibadan Express Road, Abuja-Kaduna Road, Second Niger Bridge and so on. Which projects here are these loans tied to? The only project we now know that the loans are tied to is the execution of the 2023 presidential election.

“It didn’t end there. All the Northern governors of APC extraction (16 out of 19 Governors) all agreed that it is the turn of the South. Before this decision was taken, our governors in Southern Nigeria convened in Asaba. These are governors of different political parties. Okowa was the host, he gave them food, and drinks, and they signed an agreement. He read the communique. As he was doing so, he didn’t even allow the ink to dry before he betrayed them.

APC Has Nothing To Campaign With In Delta – Oborevwori
CBN’s Planned Naira Redesign, Political Ploy By APC – Obaseki
Advertisement