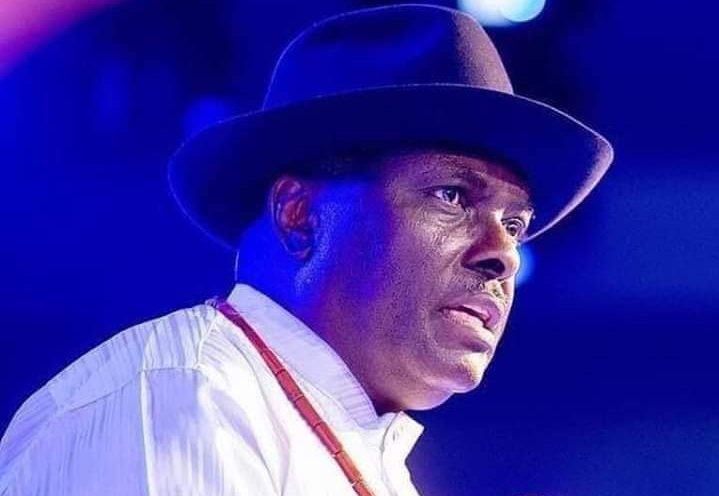 The Movement for Stronger Delta, MSD, is quite surprised and a bit disappointed that since the uncharacteristic outburst of Chief James Ibori, on March 20, 2022 when Chief Ighoyota Amori flagged off his Delta Central Senatorial campaign, many Deltans have erroneously directed his admonitions and remonstrations at the wrong quarters and for the wrong reasons.

Deltans will concur that there has been a deliberately devious, diversionary, and counterproductive concerted effort to pitch Governor Ifeanyi Okowa against Chief James Ibori, since the 2023 succession campaign commenced with intensity in Delta State. But we are happy to note that all the efforts failed woefully and came crumbling down in one huge heap, when Ekwueme declared clearly and unequivocally to Deltans, that the PDP will conduct free and fair primaries to elect candidates that will fly the Party’s flag in the 2023 general elections.

We were therefore not particularly surprised, when some irresponsible, unscrupulous, and undesirable elements, attempted to once again, misconstrue and misdirect Chief Ibori’s remonstrations in the direction of Governor Ifeanyi Okowa, instead of placing it squarely at the feet of Delta Central political leaders and stakeholders, to whom it is clearly and unambiguously meant for.

Chief James Ibori, is arguably one of the most iconic political figures to have straddled the boisterous, tempestuous, unpredictable, intriguing, and sometimes unfortunately combustible political firmament of post-modern Nigeria political space.

Odidigboigbo, as he is fondly addressed, carries the complete onomatopoeic essence and relevance of the title on his persona; flamboyant, charismatic, rambunctious, audacious, and the larger than life imperial authority of a true godfather.

His mystique often assumes mythical propensities and even in demobilized incarceration and uncharacteristic immobility, his aura akin to that of a filial poltergeist, radiated like the apparition of a shackled denizen, hovering and illuminating the ambiance of his political kingdom, with incandescent kindle.

Years of humbling sojourn in a stranger’s penitentiary has done absolutely nothing to diminish Ibori’s electrifying presence and charismatic fervour, which has neither waned nor weakened even in the sad realization of his circumscribed vicissitudes and the frugality of existential restrictions.

But if the honest truth be told, it is quite difficult to imagine how the essence of Chief James Ibori will ever disintegrate or how the stolid presence of Odidigboigbo will ever be vaporized or even pulverized, in the political firmament of Delta State and especially that of Delta Central and Urhobo land. It is simply unthinkable.

It is against this sharp backdrop, therefore, that the Movement for Stronger Delta, MSD, is trying to understand and situate the emerging imagery of the great Odidigboigbo himself, especially after his impassioned remonstrations, at Chief Amori’s Country Home in Mosogar, Ethiope West Local Government Area of Delta State, on Sunday, March 20, 2022, where he raised the alarm over an alleged gang up to disgrace him right inside his own Delta Central homestead, in the forthcoming 2023 general election.

Chief Ibori, who spoke when he declared support for the Delta Central Senatorial bid of Chief Ighoyota Amori, on the platform of the Peoples Democratic Party, PDP in 2023, said:  “I am behind and I will support Senator Ighoyota Amori every step of the way. And anybody, anyone conspiring, anybody that thinks that because I am now a former Governor they want to conspire to disgrace me, God will disgrace all of them.

“This is not issue of money. ALL MOTHERS SHOULD CALL THEIR CHILDREN TO ORDER.

“I want to assure that if you give Senator Amori your support, he will not disappoint you. I want to guarantee you that Senator Amori will perform beyond expectation because we know his capacity, we know his reach, he has contact and knows how to use it and that seat befits Amori.

“So let support him. Please, join hands with me. Support him to go to the Senate. I know that some of you from your various houses will probably be thinking. Please have a rethink, I am begging of you.

“Ibori is begging you and you are refusing? Please, support me to send Senator Ighoyota Amori to the Senate.

Now, let us place this homily in its proper perspective, for a clearer understanding and appreciation of its direction and implications.

For starters, there is no major Political figure, particularly in Delta Central (as indeed across the three Senatorial zones of the State), with the notable exception of Chief Great Ogboru of course, whose political growth and relevance was not mentored or influenced by Chief James Ibori, in the last two decades.

He is the political god of Urhoboland and his name is still gold dust when dropped deliberately or mentioned in reverential reference, by those seeking political office in the State. Odidigboigbo is an invincible colossus and the mere prospect of engaging anyone identified, either real or imagined, as one of his minions or proteges, is sufficient to completely discourage and terminate any further intent to contest.

But somewhat unexpectedly and quite inexplicably, Ibori influence and essence appears, at least in the last two election cycles, not only to be beginning to fray at the seams, but gradually and steadily eroding the substance of his hitherto impregnable political core, especially in his beloved Delta Central.

And there is no better and more revealing situation where this glaring example of the diminishing of his influence has been felt, than in the Delta Central Senatorial contest. What has been playing out quite surreptitiously, is the unfortunate dilemma of a leader and godfather, who has the onerous task and unenviable responsibility of managing his stubborn political sons and daughters, whose ambitions for elective office rose to the fire while he was incacerated, as a critical appraisal will reveal.

In 2014 for example, Ovie Omo Agege, one of Chief Ibori’s political godsons, took a shot at the Delta Central Senatorial seat under the Labour Party, after a woefully dismal performance in the PDP guber primary, which he really had no business participating in.

He was roundly and comprehensively defeated at the polls by Chief Ighoyota Amori (Odidimadi of Africa), another of Ibori’s political mentees and one would have expected naturally, that as two scions from the same political family, the matter would have been rested there and then. But, then, Chief Ibori, not wanting to be seen to take sides between his two political ‘children’, deliberately looked the other way, when Omo-Agege decided to test Amori’s victory in court. The rest, as they say, is now history and Ogidigboigo’s mystique remained intact and unblemished.

The same scenario replicated itself in the 2019 Delta Central Senatorial tussle in the PDP, when Rt. Hon. Evelyn Omavowan Oboro, often regarded as first amongst equals (right from her days as Evelyn Akpajoh), in an impressive list of Chief Ibori’s political god-daughters, which includes Faith Majemite and, decided to move up the ladder to the Senate, after two robust and impressive terms as member representing Okpe, Uvwie and Sapele Federal Constituency, in the House of Representatives.

Again, her opponent in the primary was the same Odidimadi of Africa, Chief Ighoyota Amori and once again Ibori, confronted with the dilemma of taking sides, feigned neutrality as unvanquished ghosts from the primary and run up to the tempestuous 2015 guber election, amongst other considerations, became deciding factors and Odidimadi lost out again, without much sympathy it must be noted.

However, the general election between Rt. Hon. Oboro and incumbent Senator Omo-Agege, both Ibori’s mentees, was always going to be a no brainier for the amazon from Uvwie and with rife allegations of anti-party accusations against some of the top figures in Delta Central PDP, it was not quite suprising that APC and Omo-Agege returned to the Senate, where he was later to emerge as Deputy Senate President, which, according to discerning analysts, has added even greater spice, essence and intrigue to the mystique of Odidigboigbo in Delta Central, as 2023 approaches.

There is even the exciting political permutation that Chief Ibori will play the admirable role of elder and statesman and allow the gladiators slug it out on their own mettle and strength, if eventually the PDP settles for one of his first generation godsons, particular from Delta Central, as its guber flagbearer. But that is a story for another day.

Chief James Ibori has no doubt managed and navigated the politics of Delta Central with deft, supremely astute and incomparable strategic brinkmanship, like a master ventriloquist. His reading of the political pulse of the zone is unerringly accurate and he always knows when to make the right comments with the right amount and appropriate dosage of emotion, sentiments, remonstrations and even warnings.

Those who take umbrage at the fact that he has come out so vociferously and with unIbori-like public endorsement of Chief Amori, do not really understand the clinical political calculation of that with DSP Omo-Agege overwhelming tipped to become the guber flagbearer of the APC either by cabal or self imposition, there is really no one else, amongst all those who have indicated their intentions to contest the Delta Central Senatorial seat with Chief Amori, that can be regarded as a first generation grandson or daughter of Odidigboigo.

And so there will be no guilt complex or even filial dilemma in openly throwing his full weight, with his full chest behind Odidimadi.

Which is why his very direct remonstrations, couched in choice phrases like: “All mothers should call their children to order….”This is my Senatorial District. I am a stakeholder in this party (PDP) and I am a stakeholder in Urhobo. This is my place of birth. I am with Senator Amori all the way….”Please, join hands with me. Support him to go to the Senate. I know that some of you from your various houses will probably be thinking. Please have a rethink, I am begging of you…and “Ibori is begging you and you are refusing? Please, support me to send Senator Ighoyota Amori to the Senate….”I want to say it again that this senatorial race, this Senator Amori’s bid is my bid…” are very instructive, poignant and unequivocal.

And that is why his opening statement on that fateful day, Sunday, March 20, viz: “I am behind and I will support Senator Ighoyota Amori every step of the way. And anybody, anyone conspiring, anybody that thinks that because I am now a former Governor they want to conspire to disgrace me, God will disgrace all of them”, resonates loudly and with clear and present understanding, to those it is meant for and they know themselves.

The political class of Delta Central, particularly in Delta PDP, should now look themselves in the eye, tell themselves the home truth and decide by themselves, what they want to do in the 2023 Senatorial election. They should not shift the responsibility to any one else, for as the Delta saying goes: “Na Dem hold the yam and na Dem hold the knife…”

That indeed, is the SIMPLE Agenda of the remonstrations of Chief James Ibori, the Odidigboigbo of the Universe.

Delta 2023 and the Comedy of Errors
Delta 2023: Edevbie and the Imperative of Developing Riverine Communities
Advertisement