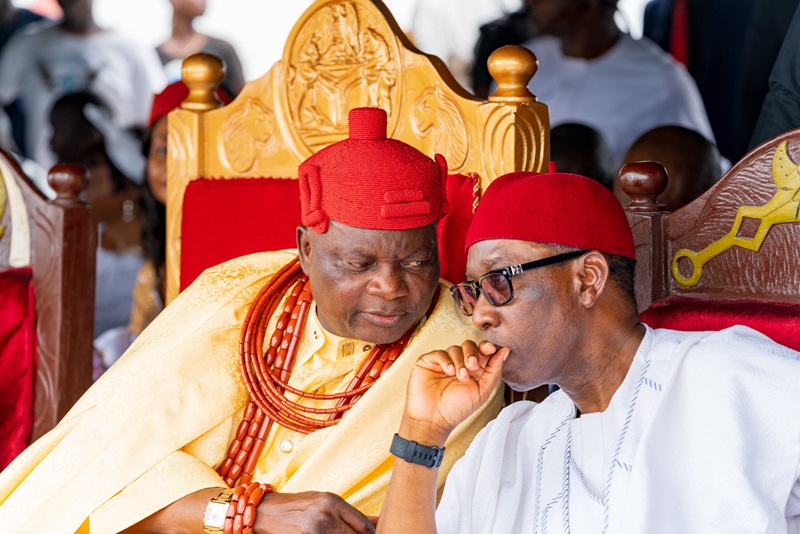 He made the call on Saturday, October 5, 2019 inaugurating an Ultra-Modern Palace of the Ovie of Agbon Kingdom, Ogunrimerime Ukori 1, at Isiokolo, Ethiope East Local Government Area of the state.

According to the governor, respect for traditional rulers is very important and, it is also Biblical for such to be done.

He congratulated the Ovie for the edifice and thanked the people of Agbon for erecting such quality of palace for their king.

The governor observed that the structure “is a wonderful palace which will stand the test of time”, adding that it was not just a palace, but could be a tourism centre in the state.

“We are proud of the king, we are proud of Agbon Kingdom,” he said, assuring that his administration would continue to execute developmental projects in the area.

Earlier in his remarks, former governor of the state, Chief James Ibori, said that the manner with which the project was delivered depicted the leadership style of Governor Okowa.

He said “there are some people who are in politics and belong to the extreme; our governor is not one of those.

“He works for all; we thank him and all those who contributed to the building of this palace.

“This is indeed a stamp of the authority of the Ovie on the kingdom and it is worthy of emulation; we thank you (the Ovie) for your selfless efforts in seeing that this palace was delivered.”

Chairman of Delta State Traditional Rulers Council, Emmanuel Efeizomor II, in his speech, commended the people of Agbon Kingdom for their unity and cooperation.

He stated that at a time when some subjects derived joy in burning down palaces across the country, “Agbon people came together to erect a befitting structure for their king.”

He observed that with the cooperation and peaceful disposition of the people, the kingdom would witness tremendous development.

Welcoming the guests, the Ovie, Ukori I, recalled that his first pronouncement immediately after his coronation in 2013 was the constitution of a building committee for the palace.

The monarch said that it was selflessness on his part that made it possible for the palace to be built.

“Nobody embezzled money and if government officials engage in selfless service, there will be development,  projects will come to fruition.”