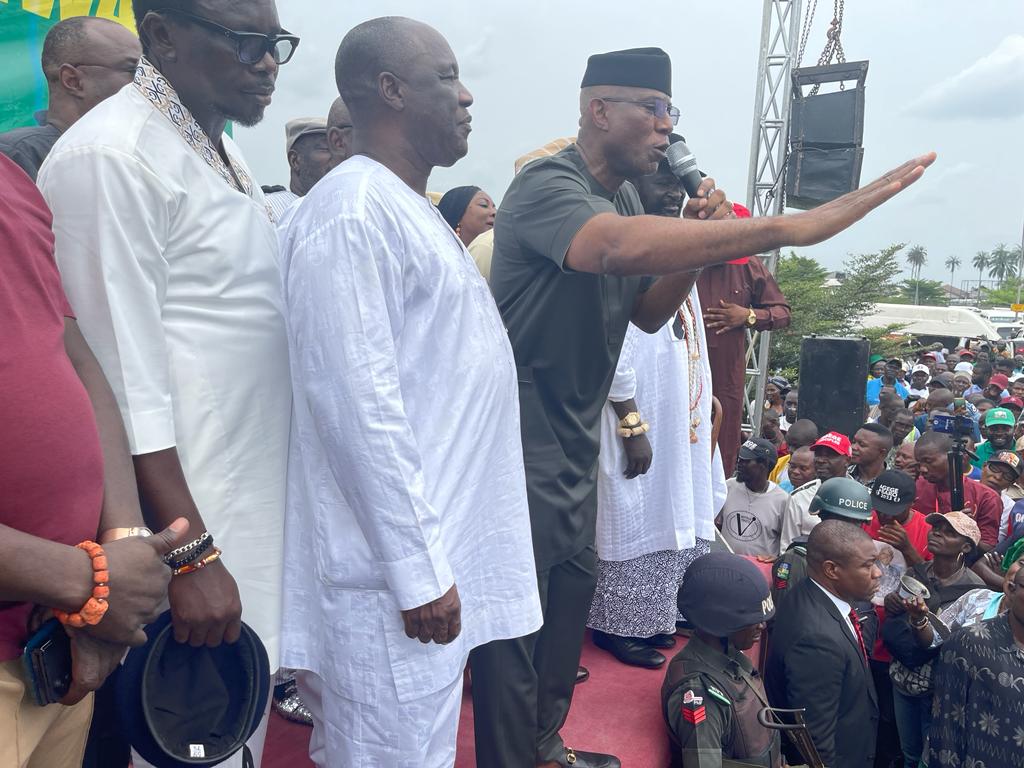 While Tinubu announced a donation of N50 million cash, Omo-Agege gave out N150 million worth of relief materials.

Addressing a mammoth crowd on behalf of Tinubu and himself in Effurun, Delta State on Tuesday, Senator Omo-Agege pointed out that the aviation strike halted the movement of the APC Presidential Candidate.

His words: “Today, I am here wearing two caps. The first cap I am wearing is the cap of the governorship candidate of APC in the 2023 general election. The second cap is that of the coordinator of Bola Ahmed Tinubu Campaign Organisation in Delta State. The essence of this gathering today is to welcome our incoming president by God’s grace, Asiwaju Bola Tinubu. The reason for the visit is to show solidarity, empathy and sympathy with our people as a result of the devastating flood in most of our communities here in Delta State. And also to provide leadership in our fight to uproot bad governance imposed in Delta State in the past seven and half years.

“But today as you all know, because of the strike in the aviation industry, and his reason for coming here is to visit IDP camps. And you know, to get to the IDP camps today, you cannot get there by road. So we made arrangements to use helicopters to move our president-in-waiting and entourage from here to IDP camps in Kwale in Delta North, Patani in Delta South and Okwagbe in Delta Central. But we have received a message that because of the strike in the aviation sector, we are not able to get any of those helicopters to move him from here to those IDP camps. So we have decided to reschedule this visit. He has promised that he’s coming back. Within the next couple of days, he will let us know; at which time the aviation strike would have been called off and we will have access to the helicopters that will take him to those locations.

“But he has also told me to make an announcement on his behalf. That because of the empathy he feels for our people, that I should announce the donation of N50million to Deltans who have lost their homes and source of livelihood and who are currently in IDP camps. This will be made available to them through the DG of this campaign, Elder Godsdey Orubebe. We are going to sit down and work out the modality on how this N50 million will be shared to each of the IDP camps to ameliorate the conditions of our people. We know that no one man can restore the losses suffered by our people. So this is Tinubu’s own way of showing love to the people of Delta State.

“In addition to that, in my capacity as the governorship candidate of APC in Delta State and as Deputy Senate President and Senator representing Delta Central, I have also made arrangements and we have acquired relief materials worth N150 million. We have made all of the procurements, food items, cement, mattresses, rice, roofing sheets and more. And beginning on Friday, we are going to set up a committee that will move from IDP camp to IDP camp to distribute all of these materials to our people who have been displaced as a result of this flood”.

ALSO READ:  I Will Resolve Aladja/Ogbe-Ijoh Land Dispute If Elected As Governor - Omo-Agege

At Okwagbe, where he led the APC train to visit the IDP camps, Omo-Agege expressed sympathy on behalf of Tinubu and himself, and said the N200million donation was a heartfelt contribution by both of them to cushion the plight of the victims of the flood.

He said that the people of Delta were prepared to vote out the Peoples Democratic Party, PDP, and asked the Okwagbe people to join the APC winning team.