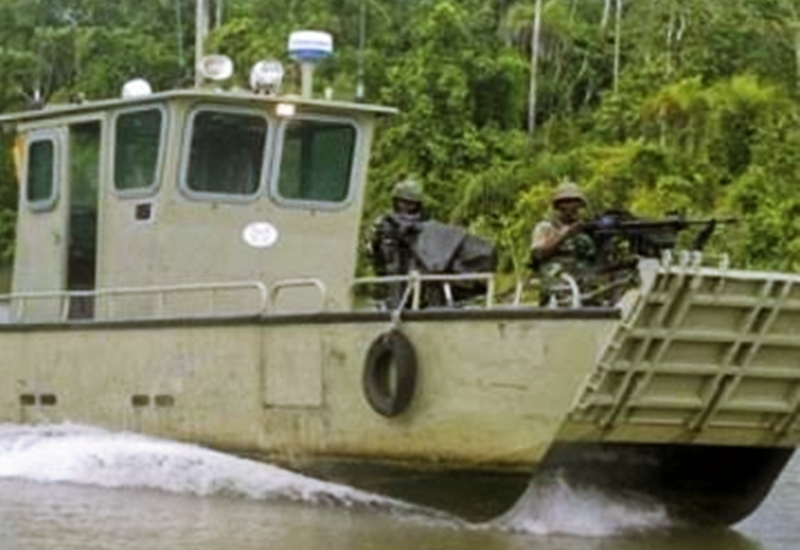 Tension mounts in Niger Delta as Nigerian Military under the Nigerian Navy have allegedly laid siege at Escravos, anchoring their gun boats at the front of Oporoza creek the traditional headquarters of Gbaramatu Kingdom in Warri South-West, Local Government Area, Delta state.

Speaking with newsmen, Barr. Gideon Mulade from the Escravos River claimed that the Navy are harassing and intimidating speedboats, passengers plying the river routes and fishermen using local hand pulling canoes thereby making life uncomfortable for the people in the area.

He is however feared that it may lead to another break down of law and order in the peaceful area and urged the Naval Authority to look into the matter, noting that election is taking place in Bayelsa and not Delta state therefore the security agents should go to Bayelsa creeks and Police that area and not Delta.

Barr. Mulade stressed that there is no election or what so ever taking place in Delta state and wondered why the Military will chose to come and pose threat and tension in the minds of the people living peacefully among themselves.

Speaking on the development via telephone, the Spokesman (FIYEWEI) of Gbaramatu Kingdom, High Chief Godspower Gbenekama JP confirmed that the Navy at Escravos said the operation is a routine exercise not to arrest and intimidate anyone in the area, adding that they are allover the river both at Burutu axis keeping surveillance because of the Election coming up this weekend in Bayelsa State.

Chief Gbenekama said the Navy Commander has assured him that they were not going to enter any community to intimidate or harass anybody but will abide to their rules of engagement and pleaded with the Navy Commander to tell his officers and ratings to be professional while discharging their duties in the area.

The Gbaramatu Kingdom Spokesman (FIYEWEI) was however worried when the National chairman of APC, Comrade Adams Oshiomhole was using Tompolo’s name in their campaign, he wondered when Tompolo became a saviour of the Niger Delta, when few months ago he was seen as the worst human being in the region. ”Those who used excreta to fill Noah’s canoe, are the same people that have cleaned the same canoe with their body because of leprosy”.

Chief Gbenekama pleaded with politicians to leave Tompolo alone in their bid to be relevant and acceptable to the people of the Niger Delta and urged everyone in Gbaramatu kingdom go about their normal businesses without fear of molestation.

The Spokesman also charged the Military to ensure that “nobody should be manhandled in any part of Gbaramatu during their operation as it concerns the Bayelsa election as the election is not taking place in the domain. He pointed out that “Gbaramatu is peaceful because there is collaboration between the Traditional institution and the Military and that it’s important to ensure we sustain and keep this peace”.