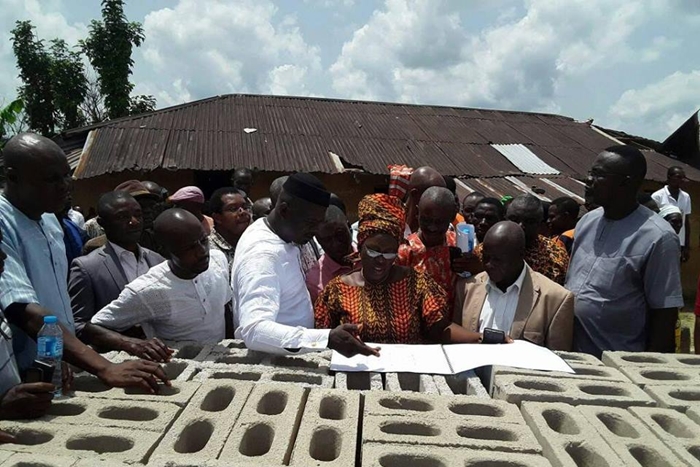 The Executive Chairman of the State Universal Basic Education Board (SUBEB), Hon. Sunny Ogwu has made a passionate appeal to Cooperate Bodies and public spirited individuals to lend their support to the Government by investing in the educational sector.

The SUBEB Chairman made the appeal at Agoloma in Patani Local Government during the formal handover of the site for the proposed construction of a staff quarter for Ogidi Primary School undertaken by Perez Omoun Endowment Fund to ease the accommodation challenge of staff of the school.

The Chairman who was represented by the First Member of the Board, Hon. Mrs. Gbubemi Ikolo said such support from the private sector will help in safeguarding the future of our nation as according to the SUBEB boss, education remains the bedrock of a developed society.

While commending the Chairman of the Perez Omoun Endowment Fund,  Barr.  Perekebina Omoun (JP) for his philanthropic gesture and for giving back to society,  the Chairman of the Basic Education Board stressed the need for the private sector to collaborate with the State Government in providing the necessary infrastructure in a critical sector of the society.

He maintained that no nation can attain any meaning progress and experience growth and development without a solid education system and called on all sons and daughters,  men of good will,  the entire Ijaw nation and cooperate organizations to emulate the humanitarian and philanthropic gesture of Barr.  Perekebina Omoun.

Earlier, in a welcome address presented by the Chairman of Agoloma-Owei Federated Community, Asigwari Godfrey poured encomium on one of their own for deploying his hard earned resources in a recessed economy to pursue a project that is beneficial to the educational sector.

The Chairman of the Agoloma Federated Community expressed optimism that the project when completed will ameliorate the accommodation challenge of staffers.

He called on the State Government to provide more infrastructure for the school and renovate the existing classroom blocks as well as address the the issue of man-power by posting more academic staff to the area.

In an interview shortly after the site was officially handed over to the Chairman of Perez Omoun Endowment Fund, Barr.  Perekebina Omoun to commence construction work, the elated Chairman of the Endowment Fund said he will not relent in his humanitarian endeavours, saying that the project which will be funded by him was very dear to his heart.

The event was attended by Officials from the Board,  Representative of the traditional ruler of the area,  party faithfuls of the ruling party in the state,  community Leaders and a cross section of women and youths who came out in large numbers to witnessed the historic occasion.