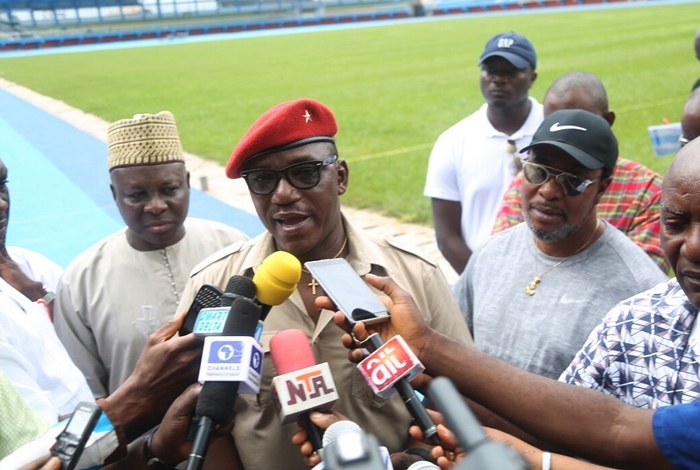 The Honourable Minister of Youth and Sports, Barrister Solomon Dalung on Thursday, July 12, 2018 paid a visit to the Stephen Keshi Stadium in Asaba, Delta State where the 21st African Senior Athletics Championships will be holding from August 1st-5th.

Dalung who was conducted round the edifice by the chairman of the Local Organizing Committee, LOC for CAA Asaba 2018 Chief Solomon Ogba as well as the Head of Technical for the championships, Yussuf Alli expressed great delight at the quality of work done at the stadium.

In a statement issued by Olukayode Thomas, CAA Asaba 2018 Head of Media and Publicity, Dalung said the facilities put in place at the Stephen Keshi Stadium are not just good enough for the African championships but they are capable of even hosting the IAAF World Championships.

The Minister admitted that a lot of work has been done since his last visit to the stadium and he specially thanked Governor Ifeanyi Okowa for leaving another legacy in sports in Delta state and Nigeria as a whole.

Dalung pointed out that the sporting family in Delta State and across Nigeria would forever be grateful for the excellent work midwifed by the Delta State governor and the members of the LOC for CAA Asaba 2018.

The Minister of Youth and Sports also pledged that the Federal Government will offer support to Delta State to ensure that Asaba put up a world class championship in August.

According to Dalung, the gains of hosting the African Senior Athletics Championships is not limited to Delta State hence the Federal government will lend support in anyway they can since it is for the collective good.

Meanwhile, the minister has also expressed great optimism that Team Nigeria will do well at the African Championships having confirmed that the country’s best legs across the world including those that missed out on the Commonwealth Games are expected to be present in Asaba.

He noted that the athletes all know what accrues to them if they win medals in Asaba; hence they have been preparing and would definitely give their best shot as they compete with the rest of the continent.