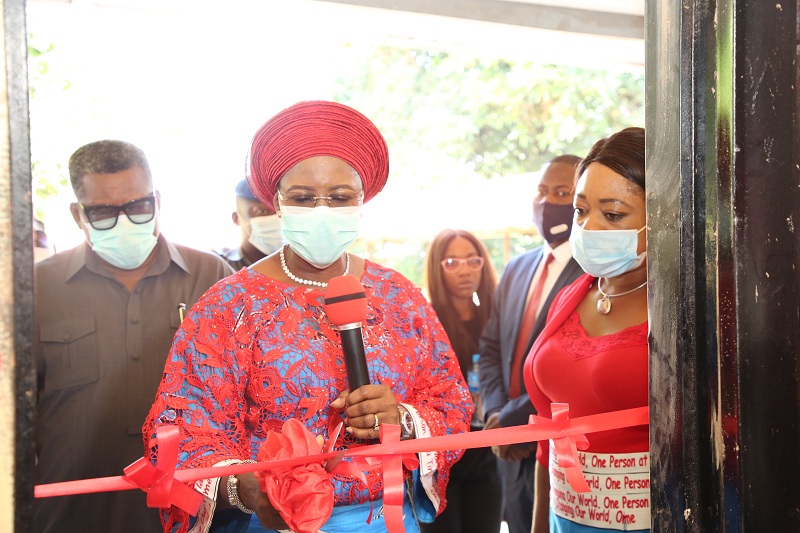 Wife of the Delta State Governor and founder, O5 Initiative, Dame Edith Okowa, has inaugurated a set of sickle cell clinics at Oshimili North Local Government Area of the state.

The inaugurated clinics at Akwukwu-Igbo and Ibusa General Hospitals respectively, are the 14th and 15th clinics to be established in the state by the wife of the Governor across the various local government areas.

Some of the facilities commissioned at the various clinics include Haematospin machines, genotype tanks, electrophoresis machines, stocks of reagents to last about five years, as well as refurbished laboratories.

Having previously established 13 sickle cell clinics across 13 different local government areas with a state-of-the-art referral centre in Asaba, Dame Okowa during the inaugural ceremony, explained that the peculiar nature of Oshimili North LGA, especially with regards to it’s vastness gave rise to the need to establish two centres in the local government.

“The commissioning of these clinics, has been a long term desire so as to help cater for the health needs of those living with sickle cell disorder.

“Beyond establishing these clinics however, our desire is to make these facilities accessible to those who need it and that is why we have gone against the initial tradition by establishing two clinics in this local government so that people can access it from different areas”, the wife of the Governor explained.

Speaking further, Dame Okowa cautioned intending couples not to ignore the need for genotype check up before taking marital decisions to avoid giving birth to children with the sickle cell disorder.

“It is our desire to see that the peculiar needs of these ‘warriors’, as we choose to call them, are met in the midst of the teeming health challenges of the growing population. This is exactly why we are establishing special clinics that would be accessible to them”, she explained.

She enjoined the people of Akwukwu-Igbo and Ibusa communities to make proper use of the facilities for the benefit the people, emphasizing that the equipment are neither to be sold nor to be relocated to a different location.

The Director General of O5 Initiative, Mrs. Oghenekevwe Agas, earlier in her address, emphasized that the projects were in line with the vision of O5 Initiative, which is centred on making life bearable for those who need help.

Member representing Oshimili North State Constituency in the Delta State House of Assembly, Hon Pat Ajudua, while playing host to the First Lady at both centres, lent her appreciation to the wife of the Governor for the initiative, describing it as laudable.

Also present at the occasion were the state Commissioner for Health and the ministry’s permanent Secretary, Dr. Mordi Ononye and Dr. Minnie Oseji, who both gave the assurance that the sickle cell disorder is far from being a death sentence, but rather a health situation that can be managed, given adequate information and medical attention.

Other dignitaries who also witnessed the event were the Vice Chancellor, Delta State University and Special Adviser to the state Governor on Sustainable Development Goals (SDGs), Prof Andy Egwuyenga and Dr. Andy Ilabor.

The event also witnessed Fred’s blood tests for members of the community, including school children.