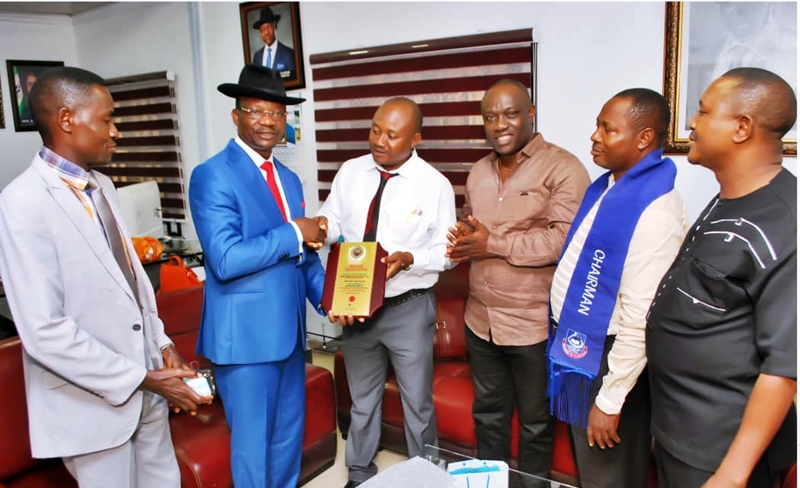 The Delta Chapter of the Auchi Polytechnic Mass Communication Students, Class 93, has honored their classmate and the State Commissioner for Information, Mr Charles Aniagwu with an award in appreciation of his commitment to the growth of the alumni body.

The award was presented to Mr Aniagwu in his office in Asaba by the Vice Chairman of the group, Mr Emeke Ikemefune, flanked by the Public Relations Officer, Comrade Nkem Nwaeke and three other members of the Delta Chapter of the association.

Mr Ikemefune who stood in for the Chairman of the Delta Chapter of body, Mr. Boniface Onyedi, said the award was in recognition of Mr Aniagwu’s contributions to the programs of the Auchi Polytechnic Mass Communication Students, Class 93 both in the state and national levels.

Mr Ikemefune disclosed that the award was to be presented to him at the reunion party held on Saturday 28 September 2019 and attended by seventh members and their spouses, but for his absence.

He assured Mr Aniagwu of their unflinching support and commended his dedication to duty as Chief Press Secretary to the Governor and now Commissioner for Information.

Also speaking, the Public Relations Officer of the body, Comrade Nkem Nwaeke, while felicitating with Mr Aniagwu, informed the Information Commissioner of the election of a seven member executive to run the affairs of the Delta State Chapter of the association.

Addressing the delegation, Mr Charles Aniagwu regretted his inability to make it to the reunion party despite efforts made to be there, but promised to be present at future gathering of the group, stressing that he had looked forward to the gathering of classmates after twenty six years.

The Information Commissioner expressed gratitude to have been so honored by his peers and solicited their continued support in building a stronger Delta as envisioned by Governor Ifeanyi Okowa.

He further enjoined the colleagues to intensify the campaign against societal ills, and pledged to give his maximum support towards the advancement of society through the activities of the group, even as he urged the members to move in one direction to achieve greater goals.

The Public Relations Officer of the alumni body, Comrade Nkem Nwaeke had in a statement, said the then representative of the class, Mr Joseph Ikupa and the Delta State Chairman of the group, Mr Boniface Onyedi, had during the reunion party, expressed gratitude to God for the grace of meeting again after twenty six years and for the life attainments of most members.

They congratulated two classmates, Mr Charles Aniagwu who is the Commissioner for Information, Delta State and Mr Sunday Aghaeze, Personal Assistant to President Muhammadu Buhari on Photography on their appointments, even as they urged the duo to remain good ambassador of Auchi Polytechnic Mass Comm Students Class 93.

Ikupa and Onyedi stressed the need to embark on programs that will impact positively to the society, particularly the alma mata.

The high point of the event was exchange of gifts.