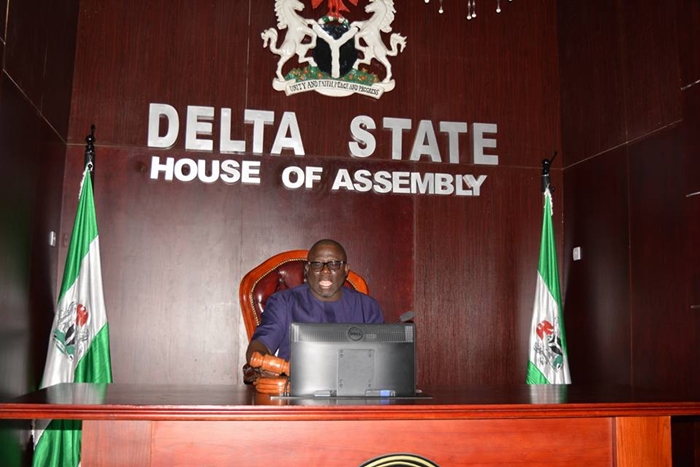 Sheriff Oborevwori of Okpe constituency became the new speaker of the Delta State House of Assembly after the former Speaker Rt. Hon. Monday Igbuya who represents Sapele constituency was impeached by 22 members of the house.

Monday Igbuya’s removal at plenary presided by the Deputy Speaker, Rt. Hon. Osanebi Ossai Friday, was predicated on allegations of incompetence, highhandedness and unacceptable leadership style by the lawmakers.

Motion for the impeachment of the speaker was unanimously adopted by all 22 members present at plenary after it was moved by Hon. Johnson Erijo, member representing Isoko South II and seconded by Rt. Hon.  Peter Onwusanya  representing Oshimili South.

The remaining seven members, including the impeached speaker, of the 29-member assembly, were absent at the proceedings.

Moving the motion, Erijo said that the removal of Igbuya became necessary following his incompetence, highhandedness and unacceptable leadership style.

He added that for the assembly to move forward, a new speaker was needed as the legislature was key to the growth of democracy and development of the state.

The new speaker was nominated by Onwusanya and Hon. Daniel Mayuku of Warri South-West constituency. After his election, Oboriowori was immediately sworn in by the Clerk of the House, Mrs. Lyna Ocholor.

In his acceptance speech, Oborevwori promised to adhere to the rules of House, saying that though he had become the first among equals, he would accord every member his due respect.

He assured that he would not allow the integrity of the assembly to be eroded, and called for support of members.

Oborevwori immediately announced the dissolution of all standing committees of the House.

Sergeant-at-Arms leads the Way at the Close of Plenary