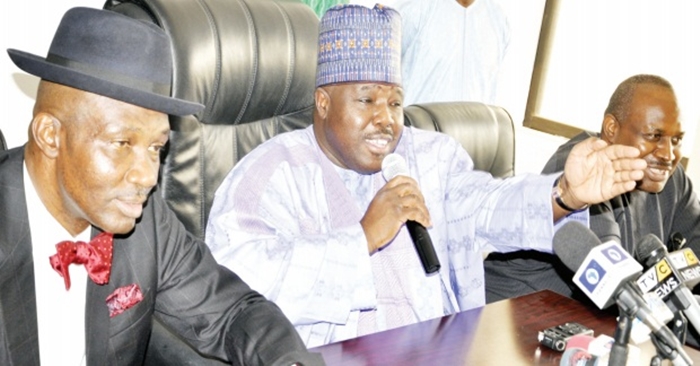 The Ali Modu Sheriff led National Working Committee of the Peoples Democratic Party (PDP), has condemned the removal of the speaker of the Delta State House of Assembly, Rt. Hon. Monday Igbuya.

In a release, the Deputy National Chairman Dr. Cairo Ojougboh voiced his displeasure on the development.

Reacting to the development in the state assembly, the PDP chieftain posited that the deep romance between Igbuya and Former governor James Ibori triggered events for the impeachment.

In the statement released by his personal Assistant, B Alli, Dr. Ojougboh comforted the ousted speaker urging him not to despair that his removal is a victory for his person and the genuine democratic forces in Delta state.

Below is the statement:

“The attention of Hon. Cairo Ojougboh, the Deputy National Chairman of the PDP have been drawn to the criminal removal of Hon. Monday Igbuya as Speaker of the Delta State House of Assembly, Asaba.

Dr. Cairo Ojougboh in a statement issued in Abuja today, 11th May, 2017 has advised Hon. Monday Igbuya not to despair that his removal is a victory for his person and the genuine democratic forces in Delta state.

He also says that Igbuya was removed from office because he accompanied His Excellency, chief James Ibori to visit the governor and good people of Bayelsa State. His problem with Gov. Okowa started immediately after that visit but we must state that Hon. Monday Igbuya has served creditably well and we are proud of his services to the people of Delta State.

Gov. Okowa should be reminded that power belongs to God and that it is transient. He should also be reminded that eight years is not forever and therefore, be mindful of how he treats people while in power.”

ASABAMETRO can authoritatively report that in the impeachment signatories, the name and signature of the daughter of James Ibori, Hon. Ehritake Ibori was not among those who moved for the process.

She was also sighted with the impeached speaker in the premises of the Delta State Governor’s lodge shortly after the impeachment process.