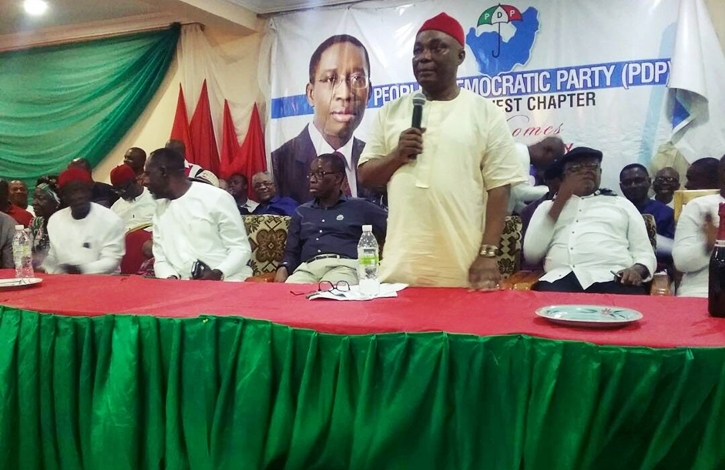 Senator representing Delta North Senatorial District, Peter Nwaoboshi at the weekend came under severe knocks when his constituents disclosed their dissatisfaction for him during the Delta North Peoples Democratic Party (PDP) meeting.

It was gathered that the mammoth crowd of party faithfuls went violent when Senator Nwaoboshi mounted the podium in his bid to address them.

The meeting which held in Kwale, Ndokwa West, was graced by political bigwigs of the party in Delta North and including the Delta State Governor, Senator Ifeanyi Okowa.

It took the intervention of the State Governor and aspiring Senator, Hon Prince Ned Nwoko before a level of sanity could return to the hall.

One of the protesters, West Africa Youth Ambassador, Comrade Odigri Ween Bella in a chat with our correspondent decried the pitiable state Delta North Senatorial District has been allegedly placed since Senator Nwaoboshi assumed the seat.

According to him, it was obvious without critical observation even to all and sundry that Senator Peter Nwaoboshi, the outgoing Incumbent Senator currently representing Delta North Senatorial District in the red chambers of the 8th Assembly has failed and performed below expectation.

Bella said, “we the Delta North populace are yearning for him to be replaced with a better and more capable hand like Hon Prince Ned Nwoko.”