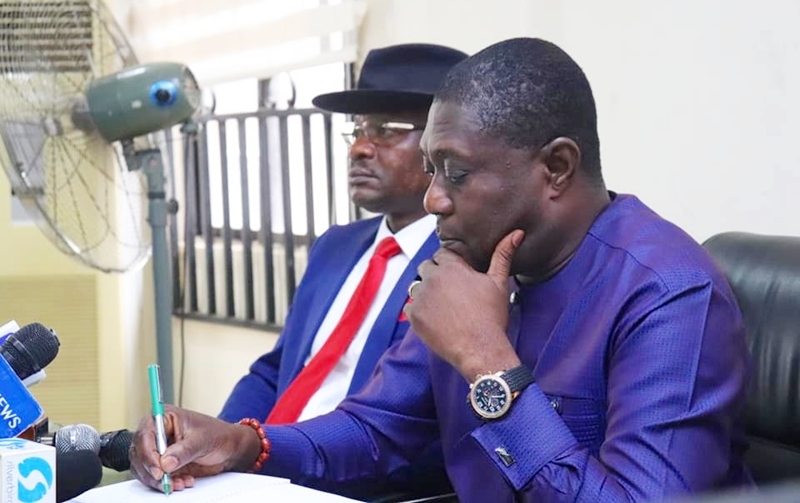 The Delta State Commissioner for Works, Mr. James Augoye has appealed to Deltans to sustain faith in the State Government as regards construction of new roads, rehabilitation, maintenance of existing ones which have been slightly hampered by the rainy season.

Augoye who made this appeal while speaking to journalists at a media briefing held at the press center of the Ministry of Information, Asaba on Monday, August 19, 2019, emphasized that Governor Ifeanyi Okowa administration’s drive in giving roads in the state a new face, is still on course, as more construction works across the three senatorial districts will kick off in the dry season.

The briefing prompted by the protest staged by Asaba-Ase community in Ndokwa East Local Government Area against the contractor handling the 7km Asaba-Ase/Abari road in Ndokwa East and Patani local government areas, who they said had abandoned the road construction for over one year, provided the Commissioner the avenue to speak on the situation of the road project.

He debunked the allegations put forward by the people of Asaba-Ase saying “It’s not true”, adding that, “Work is ongoing, you may not see some of these works until you go through that road because the culverts are being constructed on strategic sessions; the low session of the alignment. So, not until you go through it, you will not know that work is going on. I want to use this opportunity to tell those that demonstrated that, the contractor did not de-mobilise from site, we are very much aware of what is happening and we are in agreement with the contractor not to carry out work on that road except concrete works because it is a deliberate policy of this government to ensure that, roads we are constructing are all weather roads and for you to do that, it means you must get your earth work right. So this period is not the right time to construct road on Abari/Asaba-Ase area because the flooding there is very high”.

The Works Commissioner flanked by the Commissioner for Information, Mr Charles Aniagwu, stated that the recent complaints on the conditions of roads across the State was due to the heavy rains which had slowed down road constructions, as earth works in the swampy areas of the Delta South, Central and some parts of North, cannot be achieved in the rainy season.

Augoye while reiterating the commitment of the Governor Okowa in checkmating the tide of flood in the state, disclosed that the contract for the construction of Storm Water Drains in Warri, Effurun axis will soon be awarded as supervision of the materials to be deployed for the project have been concluded, adding that, construction works will commence by the dry season.

He added that the drainage work on Okpanam road in the State capital, had been completed and that the contractor in charge of the road construction has been directed to complete the road project in the coming dry season.

The Commissioner appealed to residents and commuters of Okpanam road to exercise patients with government as multiple adjoining streets on the road have been awarded for construction to ward off the flow of water and sands from the major road into the drains.

Speaking further on drainage projects, Mr James Augoye revealed that the non-closure of manholes across Asaba was a deliberate act, explaining that, the flow of sands and debris from Okpanam into the drains, need constant desilting which require the manholes to be opened and appealed to residents of the state capital to be cautious as it is one of the hazards involved in road constructions.