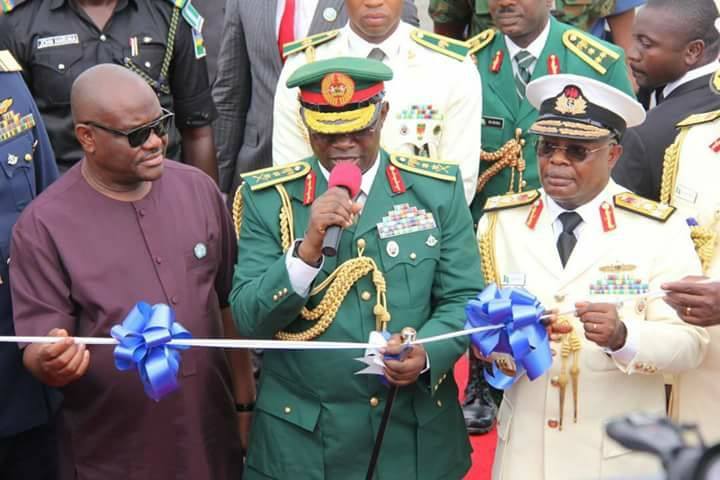 Rivers State Governor, Nyesom Ezenwo Wike on Friday April 218, 2017, donated eight (8) security Gunboats to the Nigerian Navy in order to strengthen the state’s investment in the security of lives on her waterways.

Launching the security gunboats at the Federal Lighter Terminal, Onne, Governor Wike said that his administration remains committed to the promotion of security of lives and property across the state.

He stated that his administration’s deliberate investments in the security architecture of the state has yielded positive results as Rivers is one of the safest states where people carry out their businesses without molestation.

He said: “These boats are for the security of lives and property in Rivers State. They should not be taken to the neighbouring states on any account. Any state that wants to secure her waterways should purchase her own gunboats.

“The truth is that security is paramount. There is no governance without security. That is why this administration is investing in security. We are doing everything humanly possible to support the security agencies to carry out their responbilities”.

The governor directed the Nigerian Navy to ensure that they stop sea-pirates from operating in the State.

He warned the Navy against using the Gunboats for the rigging of elections. The governor also assured that he will always promote the unity of the country.

Also, the governor announced the further acquisition of 13 Special Boats to be distributed to the Nigerian Navy, Nigerian Army and the Nigerian Police for enhanced maritime security.

Gunboats Donated to the Nigerian Navy by Rivers State Government

In his remarks, the Chief of Naval Staff, Vice Admiral Ibok Ibas commended the Rivers State Governor for his provision of the Gunboats and other logistical support.

He assured the governor that the Nigerian Navy will put the Gunboats to use as they ensure the promotion of security of lives and property in Rivers State.

The boats were commissioned by the Chief of Defence Staff, General Abayomi Olonishakin.

May Day: Okowa Extols Nigerian Workers as Driving Force of the Country’s Economy
No Section Of Delta State Is Marginalized – Ukah
Advertisement