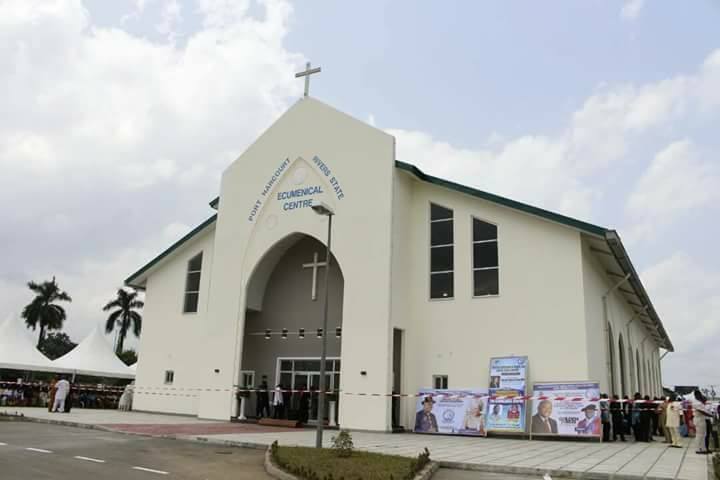 The Rivers State Government on Sunday formally handed over the State Ecumenical Centre to the Christian Association of Nigeria (CAN), after the church was commissioned and dedicated to God by the General Overseer of the Reedeemed Christian Church of God (RCCG), Pastor Enoch Adeboye.

Rivers State Governor, Nyesom Ezenwo Wike on behalf of the State Government announced that henceforth the Ecumenical Centre belongs to the Rivers State Christian Association of Nigeria, saying the body will manage and run the facility.

In confirmation of the new ownership of the structure, the governor declared that the certificate of occupancy for State Ecumenical Centre was prepared in the name of the Christian Association of Nigeria.

The governor invited the General Overseer of the Redeemed Christian Church of God, Pastor Enoch Adeboye, who made the presentation of the certificate of occupancy to the Rivers State Chairman of the Christian Association of Nigeria, Archbishop Isaac Anyanasikike.

Speaking at the thanksgiving/commissioning of the State Ecumenical Centre, Rivers State Governor, Nyesom Ezenwo Wike said the construction of the church was in fulfilment of the promise he made to Christian leaders during the campaign.

He charged the Christian leaders to see the Ecumenical Centre as a place that will foster unity amongst different denominations and not a centre that will engender division.

He said: “We promised to build a centre where people from different faiths will meet to worship God. This is a job that we have paid 100percent”.

He urged Christians to unite under the banner of Christ, saying that Rivers is unapologetically a Christian State.

Dedicating the Christian Ecumenical Centre , General Overseer of the Reedeemed Christian Church of God, Pastor Enoch Adeboye commended Governor Wike for doing what no other governor has done.

He prayed that the Ecumenical Centre will become a centre of miracle where people will always find solutions to their life challenges.

The cleric stated that the Ecumenical Centre will attract progress and peace for Rivers State and her people.

Intercessory prayers were said for Nigeria, the Church of Christ, Rivers at 50, the governor and his cabinet by the Archbishop of Niger Delta Province, Most Rev Ignatius Kattey, Most Rev Sunday Agwu and Pastor David Ibiyeomie .

A special golden jubilee prayer was said for Governor Wike and his wife by Pastor Enoch Adeboye.

Chairman of the Rivers State CAN, Archbishop Isaac Anyanasikike said the State Ecumenical Centre will promote friendship , love and refuge for the need.