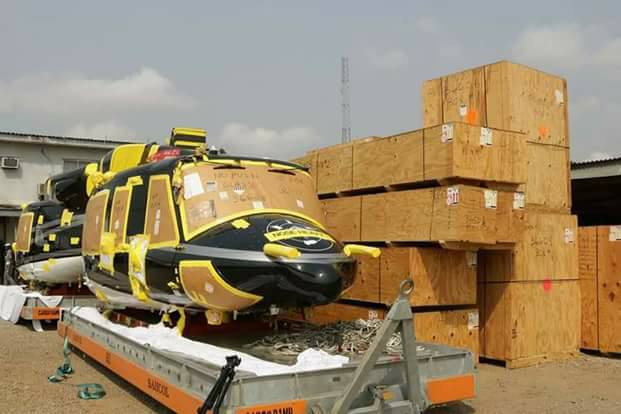 The controversy trailing the end owners of two seized Bell Helicopters by the Nigeria Customs Service at the Murtala Mohammed International Airport, has been cleared by Rivers State Governor, Nyesom Wike’

The Governor stated that the two seized helicopters by the Nigerian Customs Service belong to the Rivers state government and that he officially wrote to President Muhammadu Buhari asking him to hand over the two armoured helicopters  to Nigeria Air Force (NAF). The governor’s claim contradicts the claim of NCS that the owner of the aircraft was not known.

The governor’s claim contradicts the claim of NCS that the owner of the aircraft was not known.

Wike, in a statement issued by his spokesman, Simeon Nwakaudu, in Port Harcourt on Saturday, said he wrote the president because of high custom duties and refusal of the Federal Government to grant waiver on the helicopters.

“I went to the Federal Government to give me waiver for us to clear the helicopters but they refused.

“Thereafter, I wrote to President Buhari to assure him that the helicopters are meant for security purpose and that it should be handed over to the Nigeria Air Force.

“We stated that we cannot pay the custom duties because the helicopters are not for commercial use; but to monitor the creeks and track criminals.

“In any case, where will the Rivers Government get money at this time to import armoured helicopters to which the previous administration imported because it had money (at the time).

“I’m surprised that they have started propaganda and political falsehood on the said armoured helicopters.

“What am I going to use armoured helicopters for; what kind of country are they turning Nigeria into?” he asked.

Wike said it was unfortunate that some security agencies would allegedly resort to political propaganda and outright lies when facts of the seized armoured helicopters were known.

He said it was shocking that NCS would turn around to claim that it impounded the helicopters rather than telling the truth.

On Friday, the Murtala Muhammed International Airport Command of NCS handed over two civil model Bell helicopters imported into the country by unknown persons to the NAF.

The Service said the aircraft were seized on Nov. 7 2016.

It explained that the aircraft were handed over to NAF because of the failure of the yet-to-be-identified importers to produce end user certificate from the office of the National Security Adviser.

The Customs said the action contravened the Customs and Excise Management Act.