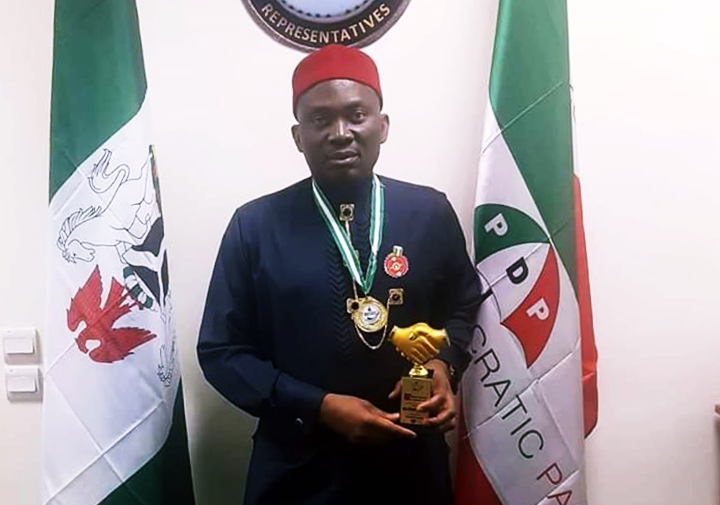 …Pledges to Continue to Work for the Peace of Nigeria.

The Minority Leader of the House of Representatives, Hon. Ndudi Godwin Elumelu has been bestowed with the award of the Legislator of the Year 2019 by the Nigerian Festival of Awards Magazine.

Hon. Elumelu, who is representing Aniocha/Oshimili Federal Constituency in the House of Representatives, was presented with the award  during the 5th dinner and award presentation ceremony of the prominent international magazine, on Sunday 8th December, 2019, at the prestigious Sheraton Hotel, Abuja, the Nigeria Capital City.

Presenting the award on behalf of the Magazine, the Convener of the Award, Mr Ben Okereke said that Hon. Ndudi Elumelu was chosen from among the nominations received across the six geo-political zones of the country, adding that Hon.  Elumelu scored 78% of the total vote cast from across the country to emerge winner at the end of the final selection process for the prestigious award

Mr. Okereke further noted that Elumelu’s impressive outing as a federal lawmaker and representative not only of his people of Aniocha/Oshimili Federal constituency, but indeed for his actions as the minority leader of the House of Representatives since the 9th Assembly was inaugurated, were critical factors in determining his choice by the award panel, saying that the award since inception has remained credible, transparent and can never be bought with money.

He however called on the Federal legislator not to relent in his resolve to work for the people of Nigeria through good legislation that will be beneficial to the wellbeing of the people.

In his acceptance speech, the Minority leader of the House of Representatives, Hon. Ndudi Elumelu expressed his appreciation for the honour bestowed on him, saying that he was humbled with the gesture.

He said that what he did as a true federal legislator was to integrate himself with the leadership and entire members of the 9th Assembly of the House of Representatives to be a strong voice of the people of Nigerian who he noted gave them the singular honour and privilege to be their representatives.

“It is a contract we signed with the people of Nigeria, it is a great mandate given to us by them through our various parties, and hence, we cannot toy with it here in the National Assembly. Our people have sent us to make good laws for their wellbeing and we shall continue to hold that responsibility sacrosanct in line with the rule of law of the Federal Republic of Nigeria”, Hon. Elumelu vowed.

Hon. Elumelu also pledged that the Minority Caucus of the House will continue to work with other members of the House of Representatives, with a view to joining hands with the relevant organs of the Federal Government to ensure peace and progress of the country in all areas.

“Let me quickly note that after our inauguration on June 11, 2019, the House of Representatives under the leadership of Rt. Hon. Femi Gbajabiamila had taken some steps to underscore the importance of making sure that we have a peaceful and most secured Nigeria by undertaking far reaching steps by way of motions and bills that are security related, which included the consideration of 23 bills and a total of 222 motions.

The colourful occasion was attended by some Members of the National Assembly as well as some captains of Industries amongst others.