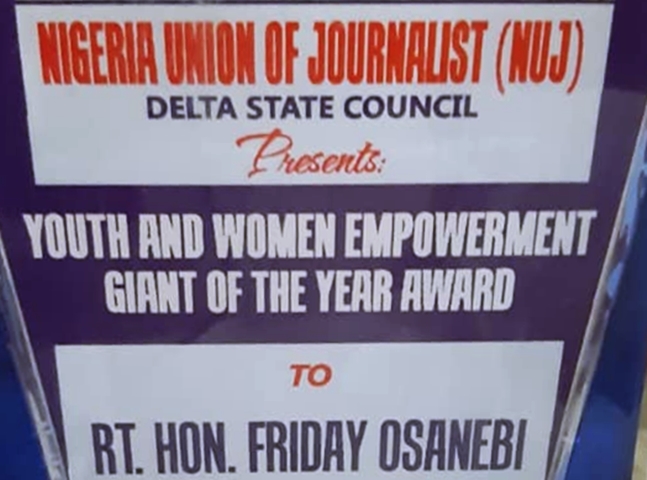 The Delta State Council of the Union which presented the award to Rt Hon Osanebi, said the recognition was to encourage him to do more for the development of mankind and growth of the society.

The youthful Lawmaker who is the immediate past Deputy Speaker of the Delta State House of Assembly and presently Chairman, House Committee on Art, Culture and Tourism, was honored alongside a few others as part of activities to mark the 2019 NUJ Press Week held in Asaba, the State Capital.

In a brief citation the NUJ said “Rt. Hon Friday Osanebi’s determination to promote overall development and his willingness to support the youths for sustained unity, peace and security in the communities has kept on growing. He has also initiated laudable modalities for effective wealth creation and distribution at the grassroots level, particularly in Ndokwa Nation. This award therefore is to encourage you to do more for the development of mankind and growth of the society”.

Describing him as a man with large heart and father to many orphans, the union stressed “Osanebi has placed so many elders, youths and women on monthly sustenance stipends. His efforts to enhance social and economic status of youths and others, he give Cars and tools for economic empowerment almost everyday under his empowerment and human development initiatives”.

The NUJ stated that as the fourth estate of the realm and watchdog of the society, it will continue to identify those promoting all round development of the society for recognition to encourage them to do more.

Receiving the award, which came barely two weeks after he received the “Ambassador for Jesus” award for his commitment to the work of God during the grand finale of the 2019 International Pastors and Partners Conference, IPPC, held in Lagos, Rt. Hon. Friday Osanebi dedicated the award to God, the youths, the less privileged in the society and the people of Ndokwa Nation.

Represented by Chief Ugo Asibelua, the EzeUgo-obi Ntanta of Ase Kingdom and Chairman, PDP Ndokwa East, Osanebi noted that his desire for a better society remains a priority and thanked Journalists for the award.

Born on the 7th October, to the families of Chief and Mrs. Ossai Osanebi of Umuedem Quarters in Beneku Town, Ndokwa East Local Government Area of Delta State, Friday Osanebi has remained a leading light for the younger generation and good ambassador to the political class.

He was a Youth President for the Beneku community and later through dint of hard work, elected President of Ndokwa National Youth Movement, Worldwide and also served as Vice President of South-South Youth Leaders Forum before venturing into politics and won election into the Delta State House of Assembly to represent Ndokwa East State Constituency for three consecutive times.

He is a successful businessman.