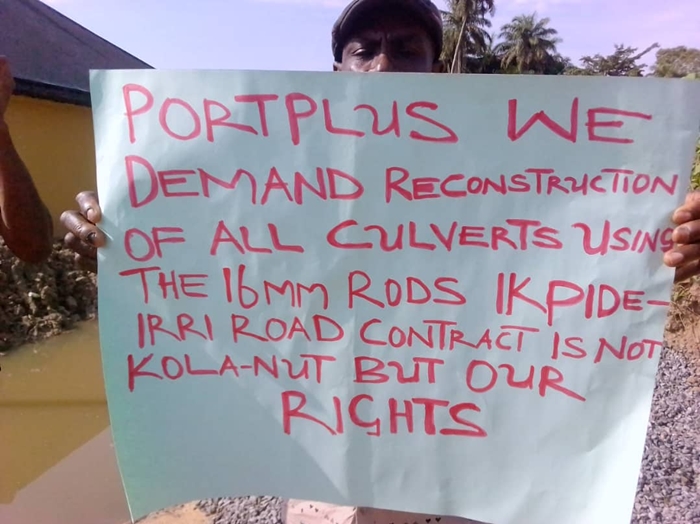 People of Ikpide-Irri, a riverine community, Isoko South local government area of Delta state, on Monday took to the streets in a peaceful protest against what they called substandard road contract awarded to Portplus Limited, a marine service company by the state government.

The N736, 404, 555.60. concrete pavement road contract which was awarded in early 2017 has become a subject of controversy for the past two weeks following the substandard materials allegedly been used for the contract.

It was gathered that some of the youths and other indigenes who came out enmass to participate in the protest were scared away by parents and relatives for fear of been victimized by power that be in the community alleged to be supporting the contractor who is said to be an indigene of the town.

The placards carrying protesters with different inscriptions such “Portplus Give Ikpide-Irri Standard Road”, “Ikpide-Irri People Say No To Substandard Construction”, “Governor Okowa Call Portplus To Order All We Are Saying Is Good Job”, “Ikpide-Irri Deserve Standard Road Not Cut And Nail”, “We Say No To Use Of 10MM Rods For Construction Of Culverts”, “EFCC, ICPC Other Anti-Graft Agencies Must Hear This” among others, called on the contractor to as a matter of urgency and importance follow standards in the execution of the contract or be ready to face anti-graft agencies.

Speaking during the protest, the leader of the protest, an activist and indigene of the community who doubles as the President of Isoko Monitoring Group, (IMG), a Pan Isoko group known for championing of development in Isoko, Delta and beyond, Mr. Sebastine Agbefe, lamented the substandard work by Portplus limited and called on the contractor to immediately destroy and reconstruct all the culverts in the community that were done with 10mm instead of 16mm according to the BOQ.

“This is a fraud of the highest order, this is pure wickedness and we can no longer folds our arms and watch anybody shortchange us because of personal greed and selfishness. We are warning the contractor to destroy all the culverts done with 10mm and reconstruct same with 16mm according to the BOQ.

“The contractor should also make sure that both sides drainages are constructed on the road and must use standard materials specified on the BOQ. And again, Portplus must adhere strictly to the specifications on the BOQ and any attempt to compromise standards as far as this contract is concerned, Portplus will be made to face EFCC and ICPC.”, Mr. Agbefe stated.

The IMG president, however enjoined indigenes of the community, especially the youths not to take the laws into their hands even as he challenge all communities in Isoko nation to be involved in the monitoring of execution of government projects in their various domains.

It was reliably gathered that last week during inspection by some officials of the state Ministry of Works, Asaba, one of the culverts constructed with 10mm rods collapsed.

Addressing the protesters, the community chairman, Mr. Francis Agbefe, said he was not interested in whether the road is constructed to standard or not but will only be thankful to God that such a huge project is being sited in the riverine community.

Meanwhile, impeccable sources have revealed that the Economic and Financial Crimes Commission, (EFCC) and the Independent Corrupt Practices and Other Related Offences Commission (ICPC), are set to take over the case of the ongoing substandard road contract awarded to PORTPLUS limited, a marine service company, at the sum of N736, 404, 555.60.

As at the time of this story, current photographs and video clips of the substandard project were already been sent to the anti-graft agencies as requested.

It would be recalled that concerned indigenes of the community, had addressed a strong worded petition to governor Ifeanyi Okowa, signed by their counsel, Mr. C.F. Ebu, of the legacy chambers, Asaba, condemning the substandard job being done by the contractor and called for strict adherence to the Bill Of Quantity, (BOQ) and the drawings.