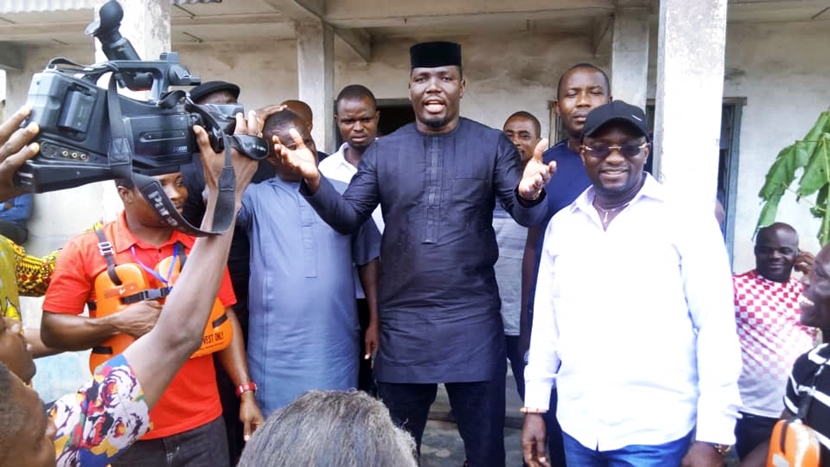 A major breakdown of law and order in the state maritime sector was averted by the prompt intervention of the Member representing Burutu Federal Constituency in the House of Representatives, Honourable Julius Pondi and the Member representing Burutu One Constituency in the State House of Assembly, Honourable Daniel Yingi following protest by speed boat owners and drivers over levies imposed on them by government.

Honourables Pondi and Yingi as well as the PDP Chairman, Delta South Senatorial district, Prince Emma Amgbaduba among others saw the protest on the river on their way back from an on the spot assessment visit to Odimodi community oil spillage and immediately intervened.

The protesters made up of boat owners and drivers had prevented boats from plying the riverine areas of the state following alleged increase in the levies on speed boats.

Explaining what led to the protest the National Chairman, Ferry Boats Owners Union, Comrade Samson Timbowei said the levy on speed boats was too much for them to pay.

He noted that they were forced to pay N500 (five hundred Naira) every day for ticket while each boat depending on its capacity paid between two thousand five hundred naira to twenty thousand naira per annum.

Comrade Timbowei said the consultant to the state government always applied force in collecting revenue from them thereby risking the lives of passengers particularly those who do not know how to swim.

He said most of them had their engine covers seized by agents of the consultants stressing that the levies were imposed on them without any stakeholders meetings.

A Representative of the Consultant said they were only carrying directives from their boss in the collection of revenue from speed boat owners and drivers .

He maintained that they had to seize the engine covers of those who failed to pay and would continue to collect revenue from them unless a directive from their superiors adding that the protest was causing tension in the Marine sector.

Addressing the protesters who carried leaves and placards with various inscriptions at the government jetty near Ogbe-Ijoh market, Honourables Pondi and Yingi appealed to them not to take laws into their hands as the State government had listening ears.

They spoke to the State Commissioner for Transport, Mr Vincent Uduaghan on phone and suggested that the payment of levies by speed boat drivers should be suspended in order to douse the tension being generated.

While noting that the protest would negatively affect the economy and lives of riverine dwellers, the lawmakers said they would have reached government before embarking on the protest.

The lawmakers said there was need for a stakeholders meeting with representatives of the boat owners and drivers Union which was agreed upon.

There was wide jubilation as they told them that the payment of levies had been suspended pending the outcome of a stakeholders meeting to be convened on a later date and returned the seized engine covers to the drivers.