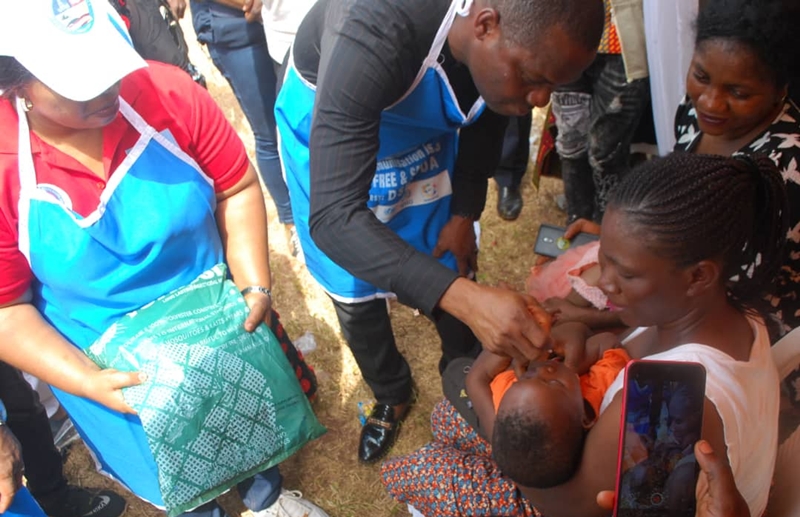 In its bid to rid the State of crippling poliomyelitis infection and secure a bright future for Nigerian Children, the Delta State Government on Friday, January 10, flagged-off the Sub-National Immunization Plus Days (SNIPDs) for children aged between 0-59 months old..

The flag-off exercise performed by the State Governor, Senator Ifeanyi Okowa at Agbogidi Primary School in Akwukwu-Igbo, headquarters of Oshimili North Local Government Area, witnessed a large turnout of nursing mothers with their babies to receive the supplemental dose of the Polio vaccine.

Governor Okowa speaking at the event organized by the Delta State Ministry of Health and Delta State Primary Health Care Development Agency in collaboration with Partners, re-echoed the importance of  SNIPDs in the fight against Polio and noted that the state in the past nine years, has not recorded any Polio incidence saying, “we are ready to sustain this achievement by providing the needed support to the vaccination teams and health worker, by engaging the right manpower, offering technical assistance and providing the required funding”.

Represented by the Commissioner for Trade and Investment, Mr Chika Ossai, Okowa charged the 25 local government chairmen in the state to actively engage in Primary Health Care activities by helping to create mass awareness of the Immunization campaign, monitoring the process and ensuring there are no missed children, resolving cases of vaccine rejection and non-compliance, and proffering solutions to other challenges encountered by field workers.

The governor further appealed for the cooperation of traditional rulers and community leaders, community based organizations, religious bodies, individuals and families to join in mobilizing mothers and caregivers to take their children to the nearest Health center for vaccination against the Polio virus.

Representative of Delta Governor, Chika Ossai speaking during the flag-Off of the Sub-National Immunization Plus Days in the State at Akwukwu-gbo in Oshimili North LGA

While encouraging the Health Workers to remain diligent in their duties, Governor Okowa commended the contributions of partners to development of healthcare in the State.

Speaking also at the event, the state Commissioner for Health, Dr Mordi Ononye commended Oshimili North council for hosting the flag-off exercise noting that the local government had remained a trailblazer in delivering quality Primary Health Care for Deltans in the area.

The Health Commissioner reiterated that the intention of immunization is to promote the growth of children and urged mothers in the state to take their children to the nearest primary healthcare centres for vaccination.

Dr Ononye who frowned at the absence of health workers from their duty posts in some parts of the state, announced that the State Ministry of Health is set to reward two outstanding health workers in Oshimili North with a special recognition award and commended the council chairman for his proactiveness in the area of healthcare.

Delta State Commissioner for Health, Dr Mordi Onoye administering the Polio Vaccine to a Baby during the flag-Off of the Sub-National Immunization Plus Days in the State

In his welcome address by Hon. Louis Ndukwe, Chairman, Oshimili North local government area, thanked the state government for considering the council for the flag-off of the second round of the National Immunization Plus Days campaign, assuring full implementation of the vaccination exercise in the local government.

Representatives of development partners- WHO, ROTARY, AFENET and National Primary Health Care Development Agency (NPHCDA) in their goodwill messages, urged for a comprehensive vaccination of children against Polio virus and advocated that schools across Delta State should implement the compulsory presentation of immunization cards by pupils and students.

Highpoint of the flag-off was the symbolic vaccination of selected children by the representative of the governor, the commissioner for health, the local government chairman and others.

The event was attended by state and local government officials, political appointees, traditional rulers, religious and community leaders, health workers amongst others.

The the Sub-National Immunization Plus Days will hold from January 11 till January 14, 2020 at the various Health Centres across the state.